The objective of this study was to evaluate the reliability of four methods of assessing vastus lateralis (VL) stiffness, and to describe the influence of structural characteristics on them. The stiffness of the dominant lower-limb’s VL was evaluated in 53 healthy participants (28.4 ± 9.1 years) with shear wave elastography (SWE), strain elastography (SE), myotonometry and tensiomyography (TMG). The SWE, SE and myotonometry were performed at 50%, and TMG was assessed at 30%, of the length from the upper pole of the patella to the greater trochanter. The thickness of the VL, adipose tissue and superficial connective tissue was also measured with ultrasound. Three repeated measurements were acquired to assess reliability, using intraclass correlation coefficients (ICC). Pearson’s correlation coefficients were calculated to determine the relationships between methodologic assessments and between structural characteristics and stiffness assessments of the VL. Myotonometry (ICC = 0.93; 95%-CI = 0.89,0.96) and TMG (ICC = 0.89; 95%-CI = 0.82,0.94) showed excellent inter-day reliability whereas with SWE (ICC = 0.62; 95%-CI = 0.41,0.77) and SE (ICC = 0.71; 95%-CI = 0.57,0.81) reliability was moderate. Significant correlations were found between myotonometry and VL thickness (r = 0.361; p = 0.008), adipose tissue thickness (r = −0.459; p = 0.001) and superficial connective tissue thickness (r = 0.340; p = 0.013). Myotonometry and TMG showed the best reliability values, although myotonometry stiffness values were influenced by the structural variables of the supra-adjacent tissue. View Full-Text
Keywords: shear wave elastography; strain elastography; MyotonPRO; tensiomyography; mechanical properties shear wave elastography; strain elastography; MyotonPRO; tensiomyography; mechanical properties
►▼ Show Figures 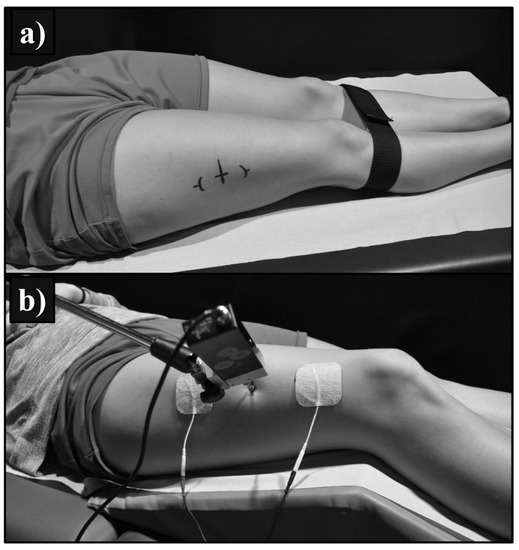