LoRaWANSim: A Flexible Simulator for LoRaWAN Networks
Next Article in Special Issue

This paper reports on a study of the response of a T-gate strained-Si MODFETs (modulation-doped field-effect transistor) under continuous-wave sub-THz excitation. The sub-THz response was measured using a two-tones solid-state source at 0.15 and 0.30 THz. The device response in the photovoltaic mode was non-resonant, in agreement with the Dyakonov and Shur model for plasma waves detectors. The maximum of the photoresponse was clearly higher under THz illumination at 0.15 THz than at 0.3 THz. A numerical study was conducted using three-dimensional (3D) electromagnetic simulations to delve into the coupling of THz radiation to the channel of the transistor. 3D simulations solving the Maxwell equations using a time-domain solver were performed. Simulations considering the full transistor structure, but without taking into account the bonding wires used to contact the transistor pads in experiments, showed an irrelevant role of the gate length in the coupling of the radiation to the device channel. Simulations, in contradiction with measurements, pointed to a better response at 0.3 THz than under 0.15 THz excitation in terms of the normalized electric field inside the channel. When including four 0.25 mm long bonding wires connected to the contact pads on the transistor, the normalized internal electric field induced along the transistor channel by the 0.15 THz beam was increased in 25 dB, revealing, therefore, the important role played by the bonding wires at this frequency. As a result, the more intense response of the transistor at 0.15 THz than at 0.3 THz experimentally found, must be attributed to the bonding wires. View Full-Text
Keywords: terahertz; SiGe; silicon; strained-Si; MODFET; electromagnetic simulation terahertz; SiGe; silicon; strained-Si; MODFET; electromagnetic simulation
►▼ Show Figures 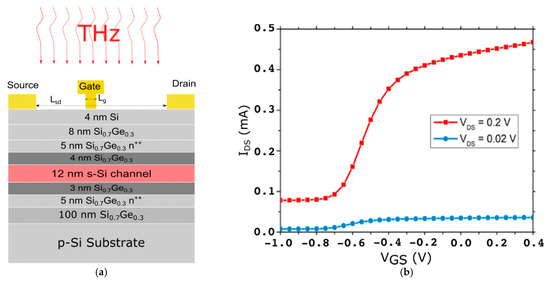