On the 4th of August 2020, a massive explosion occurred in the harbor area of Beirut, Lebanon, killing more than 100 people and damaging numerous buildings in its proximity. The current article aims to showcase how open access and freely distributed satellite data, such as those of the Copernicus radar and optical sensors, can deliver a damage proxy map of this devastating event. Sentinel-1 radar images acquired just prior (the 24th of July 2020) and after the event (5th of August 2020) were processed and analyzed, indicating areas with significant changes of the VV (vertical transmit, vertical receive) and VH (vertical transmit, horizontal receive) backscattering signal. In addition, an Interferometric Synthetic Aperture Radar (InSAR) analysis was performed for both descending (31st of July 2020 and 6th of August 2020) and ascending (29th of July 2020 and 10th of August 2020) orbits of Sentinel-1 images, indicating relative small ground displacements in the area near the harbor. Moreover, low coherence for these images is mapped around the blast zone. The current study uses the Hybrid Pluggable Processing Pipeline (HyP3) cloud-based system provided by the Alaska Satellite Facility (ASF) for the processing of the radar datasets. In addition, medium-resolution Sentinel-2 optical data were used to support thorough visual inspection and Principal Component Analysis (PCA) the damage in the area. While the overall findings are well aligned with other official reports found on the World Wide Web, which were mainly delivered by international space agencies, those reports were generated after the processing of either optical or radar datasets. In contrast, the current communication showcases how both optical and radar satellite data can be parallel used to map other devastating events. The use of open access and freely distributed Sentinel mission data was found very promising for delivering damage proxies maps after devastating events worldwide. View Full-Text
Keywords: Copernicus; Sentinel-1; Sentinel-2; InSAR; change detection; damage proxy map; Beirut; Lebanon; explosion Copernicus; Sentinel-1; Sentinel-2; InSAR; change detection; damage proxy map; Beirut; Lebanon; explosion
►▼ Show Figures 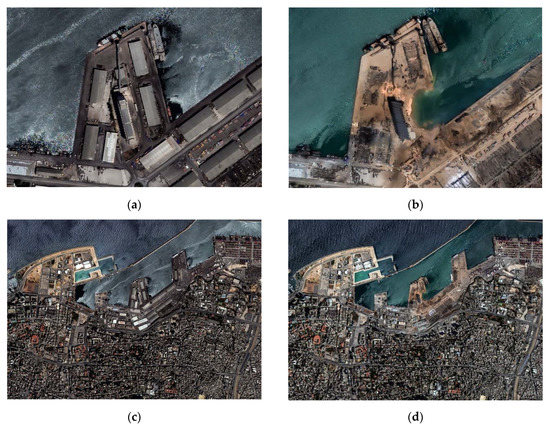