Most autonomous car control frameworks are based on a middleware layer with several independent modules that are connected by an inter-process communication mechanism. These modules implement basic actions and report events about their state by subscribing and publishing messages. Here, we propose an executive module that coordinates the activity of these modules. This executive module uses hierarchical interpreted binary Petri nets (PNs) to define the behavior expected from the car in different scenarios according to the traffic rules. The module commands actions by sending messages to other modules and evolves its internal state according to the events (messages) received. A programming environment named RoboGraph (RG) is introduced with this architecture. RG includes a graphical interface that allows the edition, execution, tracing, and maintenance of the PNs. For the execution, a dispatcher loads these PNs and executes the different behaviors. The RG monitor that shows the state of all the running nets has proven to be very useful for debugging and tracing purposes. The whole system has been applied to an autonomous car designed for elderly or disabled people. View Full-Text
Keywords: autonomous driving; decision-making system; autonomous driving behaviors; vehicle control framework; Petri nets autonomous driving; decision-making system; autonomous driving behaviors; vehicle control framework; Petri nets
►▼ Show Figures 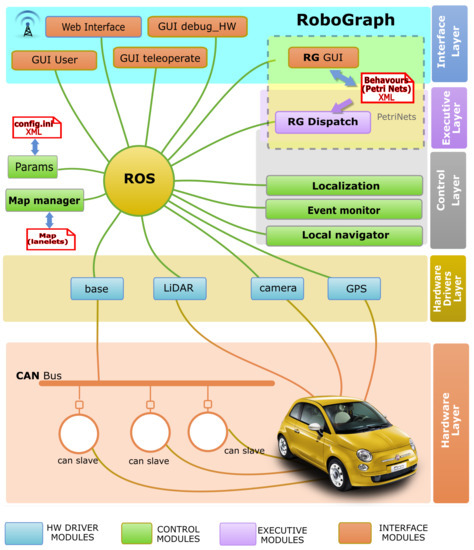