This paper presents the analysis of an intensity variation polymer optical fiber (POF)-based angle sensor performance, i.e., sensitivity, hysteresis and determination coefficient (), using cyclic transparent optical polymer (CYTOP) fiber. The analysis consisted of two approaches: influence of different light source central wavelengths (430 nm, 530 nm, 660 nm, 870 nm and 950 nm) and influence of different angular velocities ( rad/s, rad/s, rad/s, rad/s and rad/s). The first approach aimed to select the source which resulted in the most suitable performance regarding highest sensitivity and linearity while maintaining lowest hysteresis, through the figure of merit. Thereafter, the analysis of different angular velocities was performed to evaluate the influence of velocity in the curvature sensor performance. Then, a discrete angular velocity compensation was proposed in order to reduce the root-mean-square error (RMSE) of responses for different angular velocities. Ten tests for each analysis were performed with angular range of to , based on knee and ankle angle range during the gait. The curvature sensor was applied in patterns simulating the knee and ankle during the gait. Results show repeatability and the best sensor performance for nm in the first analysis and show high errors for high angular velocities ( rad/s) in the second analysis, which presented up to angular error. The uncompensated RMSE was high for all velocities ( to ), whereas the compensated RMSE decreased up to ( to ). The compensated responses of application tests showed maximum error of and minimum of , presenting a decrease of mean angular error up to when compared with uncompensated responses. View Full-Text
Keywords: movement analysis; optical fiber sensors; joint angle; cytop movement analysis; optical fiber sensors; joint angle; cytop
►▼ Show Figures 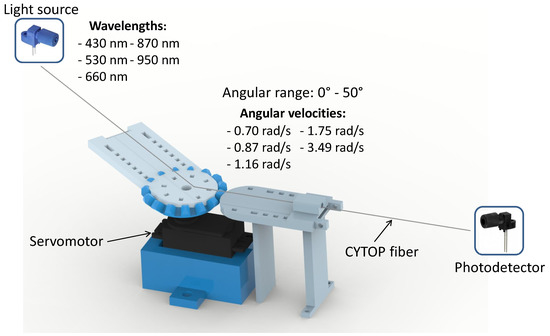