This paper features the synthesis of thrombin-responsive, nucleic acid-gated, UiO-68 metal–organic framework nanoparticles (NMOFs) loaded with the drug Apixaban or rhodamine 6G as a drug model. Apixaban acts as an inhibitor of blood clots formation. The loads in the NMOFs are locked by duplex nucleic acids that are composed of anchor nucleic acids linked to the NMOFs that are hybridized with the anti-thrombin aptamer. In the presence of thrombin, the duplex gating units are separated through the formation of thrombin–aptamer complexes. The unlocking of the NMOFs releases the drug (or the drug model). The release of the drug is controlled by the concentration of thrombin. The Apixaban-loaded NMOFs revealed improved inhibition, as compared to free Apixaban, toward blood clot formation. This is reflected by their longer time intervals for inducing clot formation and the decreased doses of the drug required to affect clots formation. The beneficial effects of the Apixaban-loaded NMOFs are attributed to the slow-release mechanism induced by the NMOFs carriers, where the inhibition of factor Xa in the blood clotting cycle retards the formation of thrombin, which slows down the release of the drug. View Full-Text
Keywords: Factor Xa; switch; nanomedicine; DNA-nanotechnology; sensor Factor Xa; switch; nanomedicine; DNA-nanotechnology; sensor
►▼ Show Figures 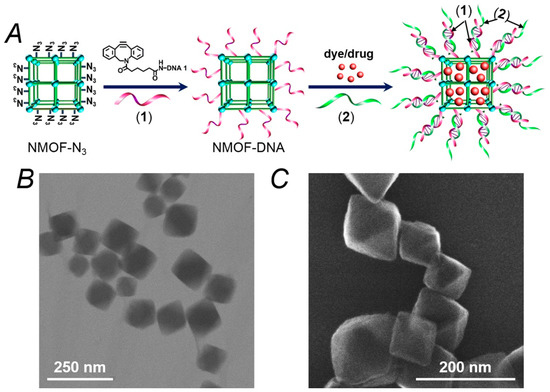