The application of a novel Poly(3,4-ethylenedioxythiophene)-Tyrosinase/Sonogel-Carbon electrode (PEDOT-Tyr/SNGC) biosensor to beers and wines analysis is proposed. This biosensor implies a new Sinusoidal Current (SC) electrodeposition method to immobilize the enzyme generating a nanostructure surface. The biosensors were characterized electrochemically, employing cyclic voltammetry and electrochemical impedance spectroscopy. Sensitivity, limit of detection, and correlation coefficients of the linear fitting were 2.40 × 10−4 µA·µM−1, 4.33 µM, and R2 = 0.9987, respectively. Caffeic acid is used as the reference polyphenol. A sampling of nine beers (four lager, three stout, and two non-alcoholic beers), and four wines (three red and one white wine) purchased in a local store was performed. The Polyphenol indeces for beers and wines have been assessed using the proposed biosensor, and the obtained values are in agreement with the literature data. Antioxidant properties of the samples using the 2,2′-azino-bis(3-ethylbenzothiazoline-6-sulphonic acid (ABTS) radical spectrophotometric method were also evaluated. The correlation between the polyphenol index and the antioxidant capacity was obtained for beers and wines. View Full-Text
Keywords: sonogel–carbon based biosensor; sinusoidal current method; polyphenol index; antioxidant capacity; beer and wine sonogel–carbon based biosensor; sinusoidal current method; polyphenol index; antioxidant capacity; beer and wine
►▼ Show Figures 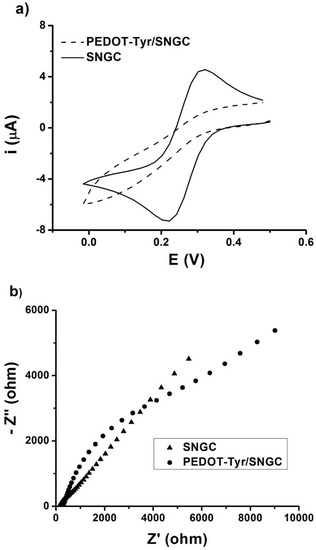