Analyte sensitivity for gas sensors based on semiconducting metal oxides should be highly dependent on the film thickness, particularly when that thickness is on the order of the Debye length. This thickness dependence has previously been demonstrated for SnO2 and inferred for TiO2. In this paper, TiO2 thin films have been prepared by Atomic Layer Deposition (ALD) using titanium isopropoxide and water as precursors. The deposition process was performed on standard alumina gas sensor platforms and microscope slides (for analysis purposes), at a temperature of 200 °C. The TiO2 films were exposed to different concentrations of CO, CH4, NO2, NH3 and SO2 to evaluate their gas sensitivities. These experiments showed that the TiO2 film thickness played a dominant role within the conduction mechanism and the pattern of response for the electrical resistance towards CH4 and NH3 exposure indicated typical n-type semiconducting behavior. The effect of relative humidity on the gas sensitivity has also been demonstrated. View Full-Text
Keywords: gas sensing; sensors; ALD; TiO2; titanium isopropoxide; thin films; debye length gas sensing; sensors; ALD; TiO2; titanium isopropoxide; thin films; debye length
►▼ Show Figures 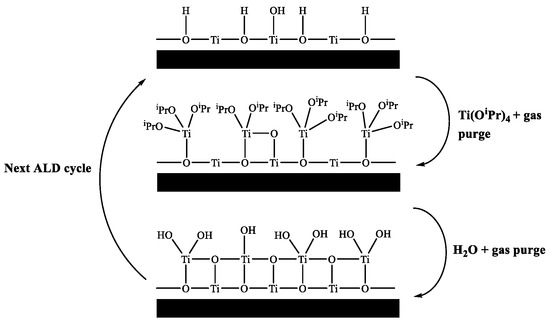