Theoretical and Experimental: The Synthetic and Anion-Binding Properties of Tripodal Salicylaldehyde Derivatives
Previous Article in Journal

Fluoride Anion Recognition by a Multifunctional Urea Derivative: An Experimental and Theoretical Study

Anion sensing and, as consequence, the design, synthesis and development of new sensors constitute nowadays a highly active research field [1,2,3,4,5]. It is well established that anion-sensor coordination takes place usually by hydrogen bonding and/or electrostatic interactions. Among others, sensors with an optical response (i.e., fluorescence) have been found to be the most suitable and attractive tools for anion recognition mainly due to their high sensitivity at low analyte concentration [6]. Within this context, different signaling mechanisms such as photoinduced electron transfer (PET) [7,8,9,10,11], excimer/exciplex formation [12,13], intramolecular charge transfer (ICT) [14,15], and excited-state proton transfer [16,17] have been previously reported in the literature.
After Wilcox [18] and Hamilton [19] discovered the interaction between urea-derivatives and phosphonates, sulphates or carboxylates forming stable 1:1 complexes, the urea moiety has played an essential role as one of the most suitable binding sites in the vast field of anion receptor chemistry. In general, recognition and detection of other anions such as fluoride (F¯) have attracted considerable interest because of its established role in dental care [20], treatment of osteoporosis [21] and its association with chemical weapons (e.g., nerve gases such as sarin, soman and GF chemical warfare agents) or terrorism (e.g., sarin gas was released in the Tokyo subway attack killing 12 people and injuring 5500 in May, 1995) [22,23]. Examples of fluorescent sensors with urea-containing receptor that detect selectively fluoride anion have been reported [24,25,26,27,28,29,30,31,32,33] and explored by computational techniques [34,35,36,37,38,39,40,41].
Recently, we have reported the self-assembly properties of a well-known chiral N,N′-disubstituted urea-based organocatalyst [42,43] 1 that lead to the formation of multiresponsive, hierarchical supramolecular organogels at low concentrations driven mainly by hydrogen bonding and π-π interactions (Figure 1) [44]. In general, multifunctional molecular structures have received great attention during the last decade due to their potential use in advanced materials and devices [45]. Herein, we describe a new facet of this versatile urea 1 as a selective fluoride anion receptor among other halides.

All commercially available solvents and reagents for synthesis and analysis (p.a. grade) were used as received. Urea derivatives were synthesized and characterized as previously described and showed identical spectroscopic data to those reported [44]. Briefly, urea 1 was easily synthesized by an equimolar reaction of commercial (1S,2R)-1-amino-2,3-dihydro-1H-inden-2-ol and 3,5-bis(trifluoromethyl)phenyl isocyanate in methylene chloride at room temperature [44]. The organogel was prepared as following: urea 1 (8 mg, 0.02 mmol) was weighed and placed into a screw cap vial (4.5 cm length × 1.2 cm diameter) and 1 mL of CHCl3 was added. The closed vial was gently heated with a heat gun until the solid compound was completely dissolved. The obtained isotropic solution was cooled down spontaneously to room temperature affording the gel formation. No flow of the material was observed upon turning the vial upside-down at room temperature.

Absorption spectra were recorded using a Cary 50 Bio UV-visible spectrophotometer (Varian, Palo Alto, CA, USA). Fluorescence and excitation spectra were carried out using a Fluoromax-4 spectrofluorometer (Horiba, Kyoto, Japan). The excitation and emission slit widths were 5 nm. The samples were placed into quartz cells of 1 cm path length. All measurements were performed at room temperature and compound concentrations were fixed as indicated.

Chemical structures were optimized with the GAUSSIAN09 program package [46] and the density functional theory (DFT) method. B3LYP functional [47] together with the standard basis set 6–31G(d) [48] and the CPCM-SCRF method [49,50] were used to model the solvent (acetonitrile). NMR shifts were computed on the optimized structures using the GIAO method [51].

In summary, urea 1 was found to selectively recognize fluoride anion among other halides as demonstrated by means of absorption as well as fluorescence spectroscopic data. The signaling mechanism relies on the formation of a CT complex between sensor 1 and F¯ in the ground state (Figure 8). In this sense, upon recognition of the anion, new absorption and fluorescence bands of this CT complex at longer wavelengths were clearly detected together with a high association constant. The nature of the H-bonding interaction between 1 and fluoride was unambiguously proven by 1H-NMR studies and theoretical calculations. Finally, the recovery of the sensor was achieved using protic solvents such as methanol. 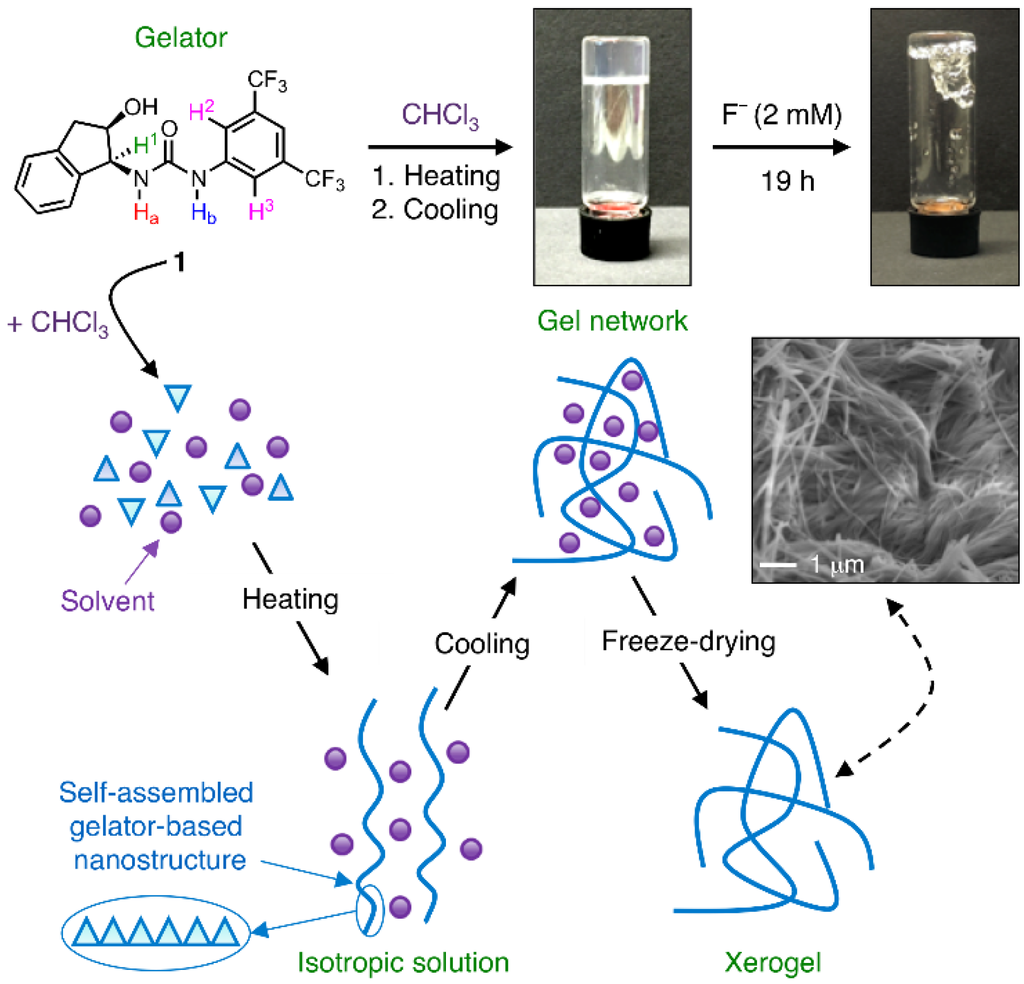 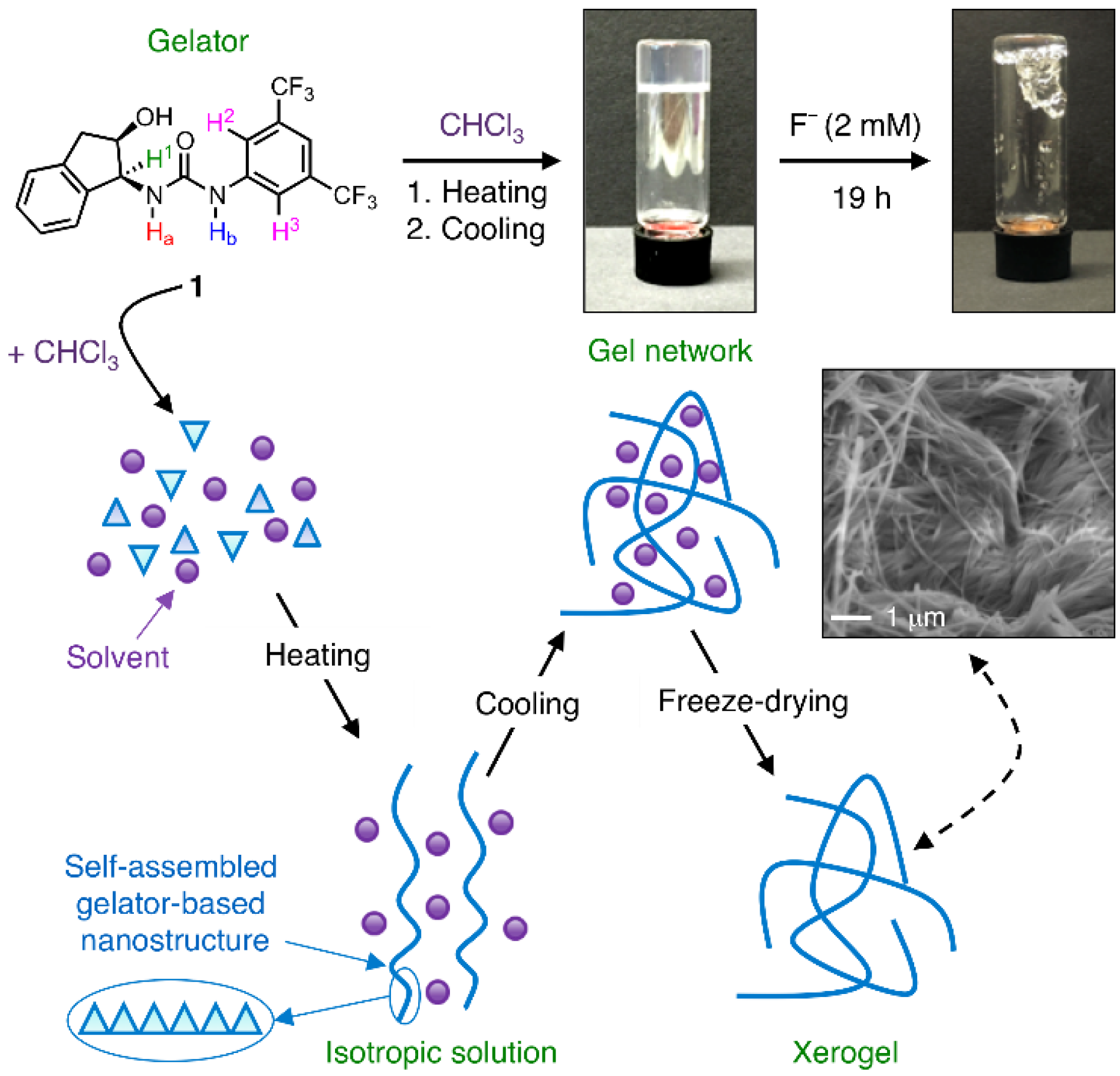 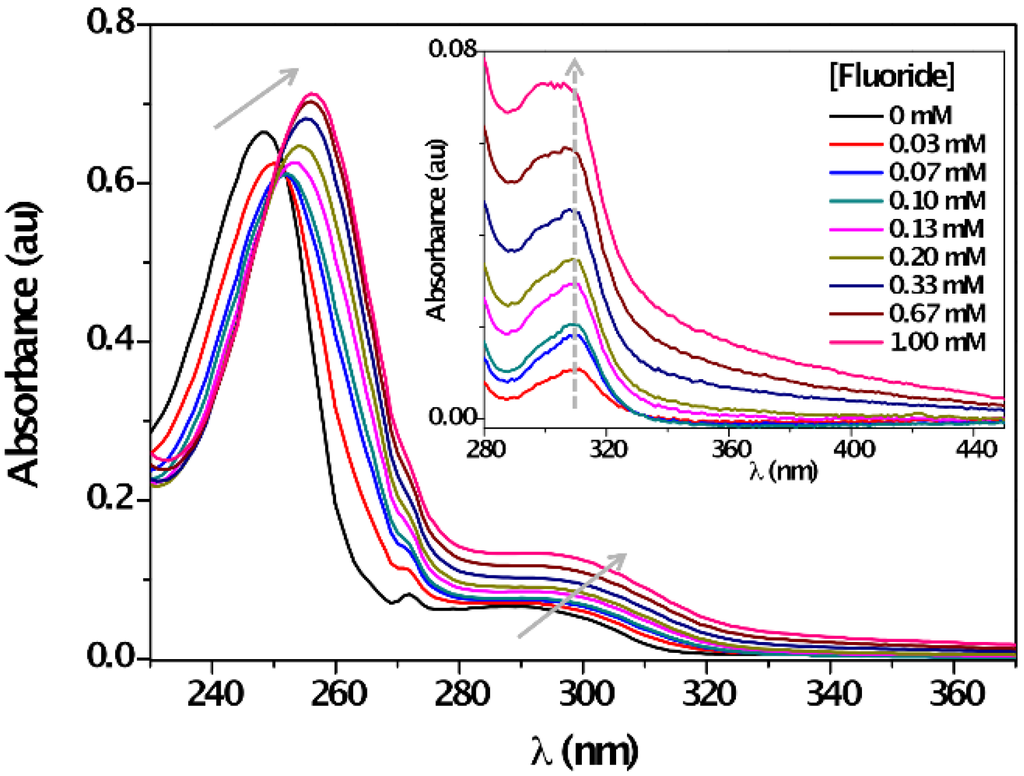 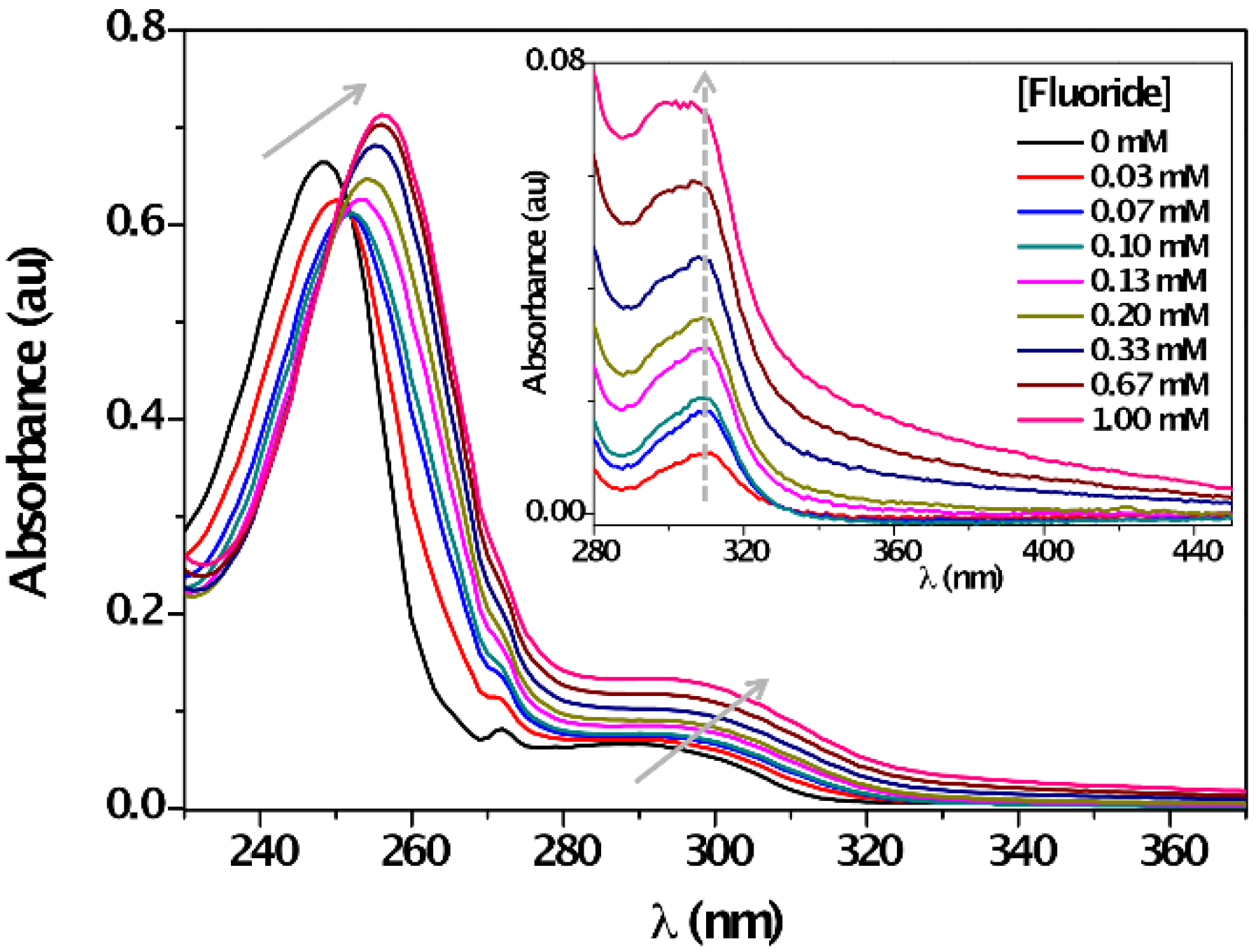 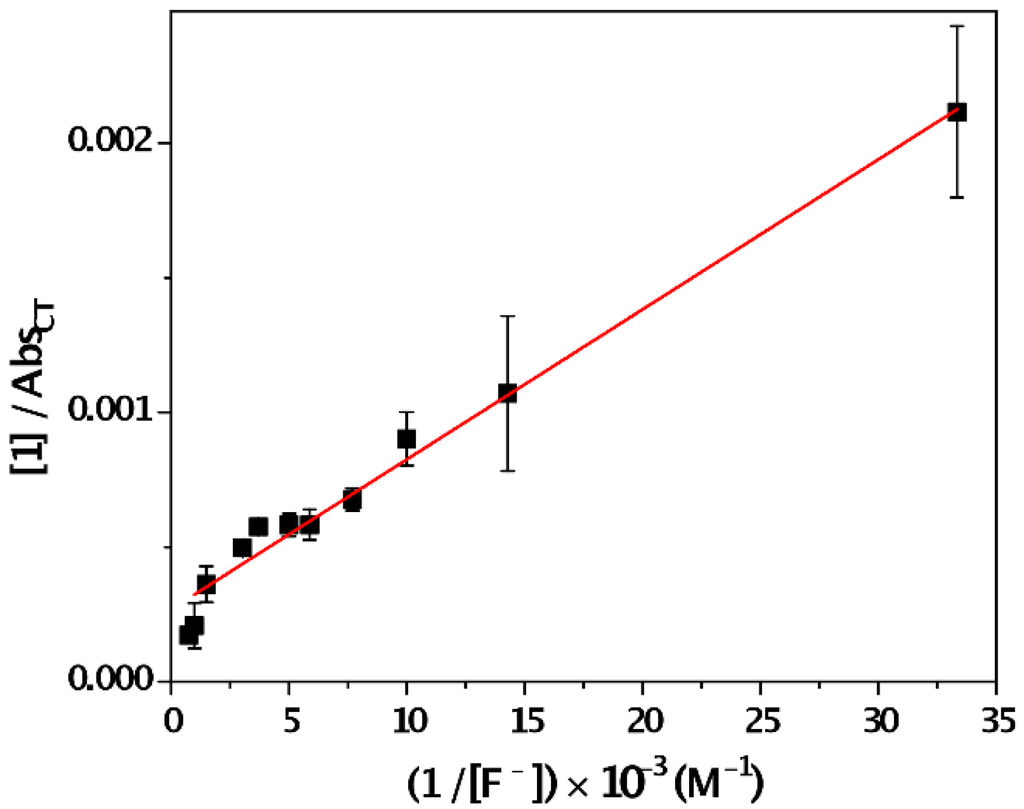 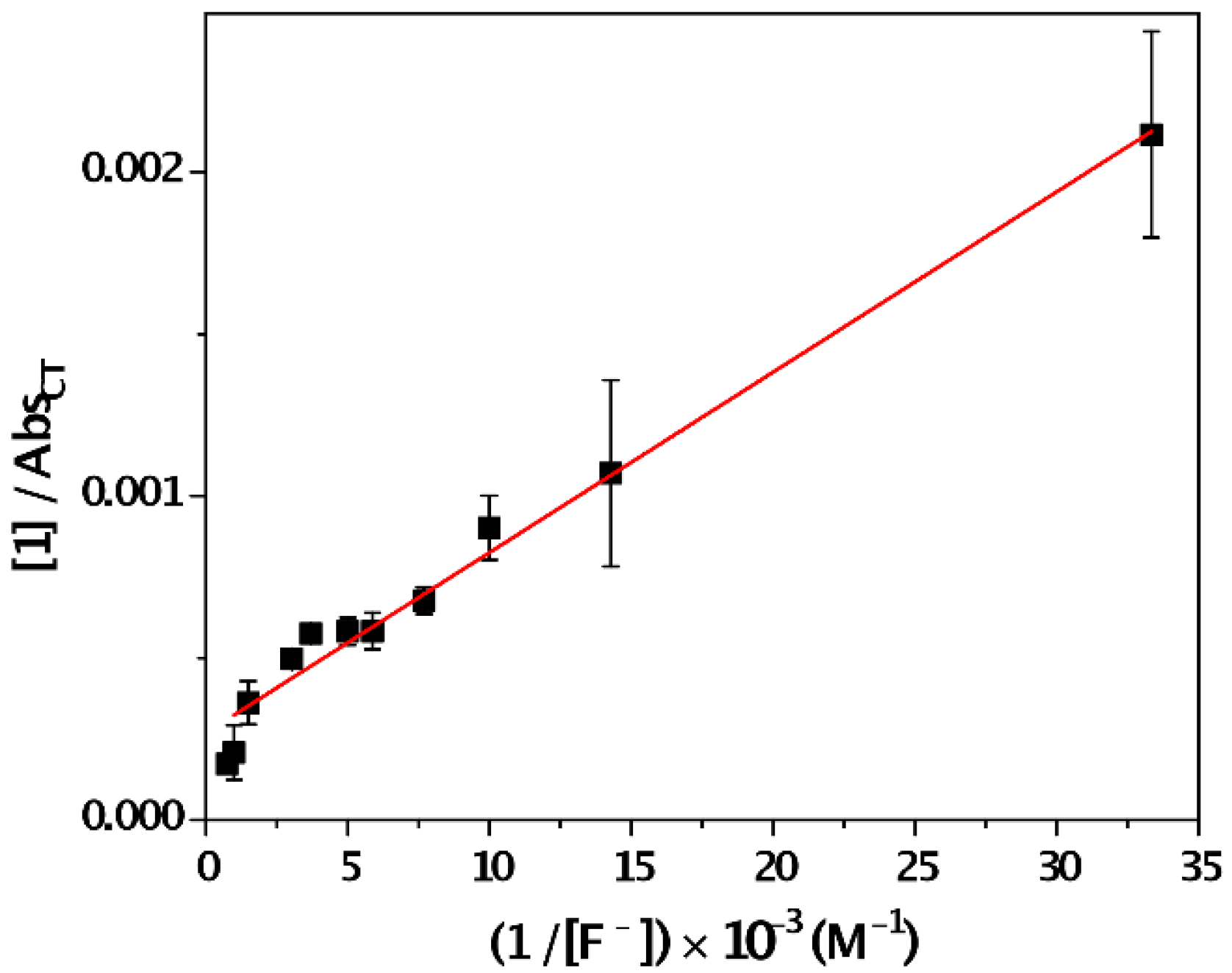 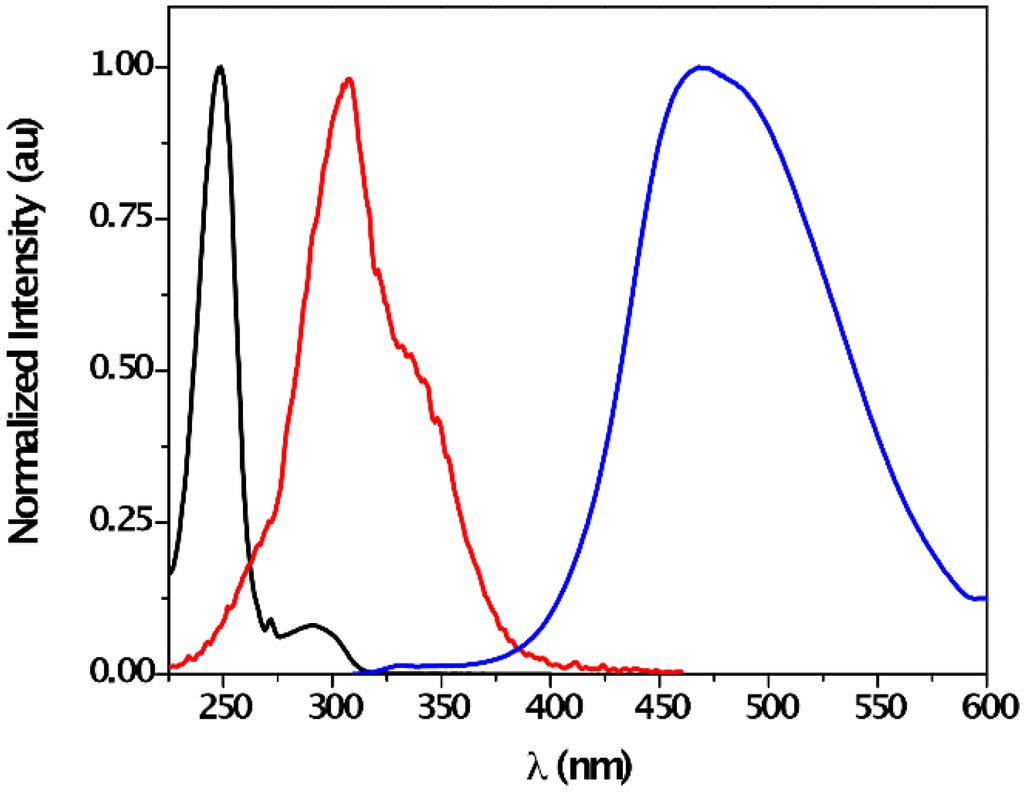 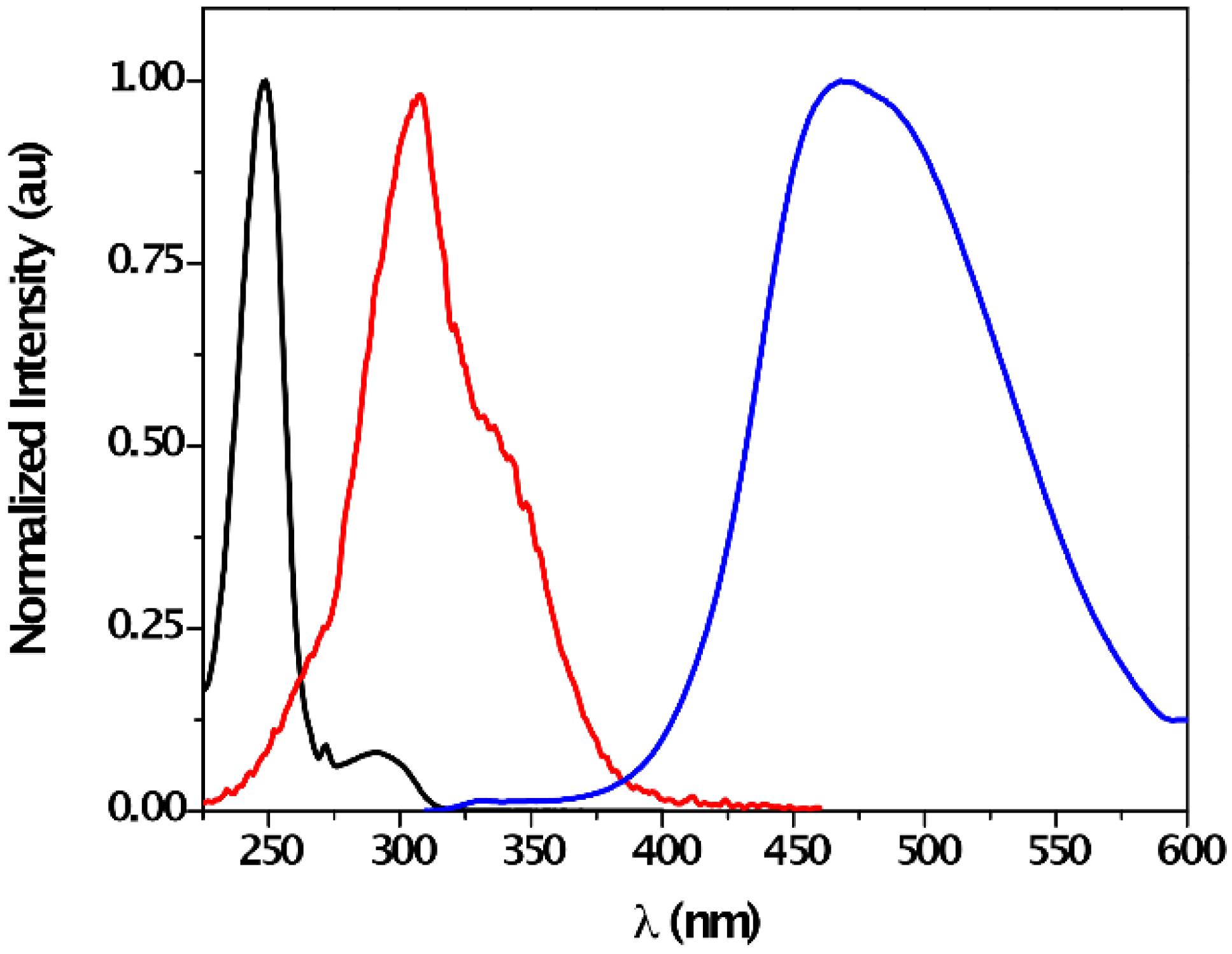 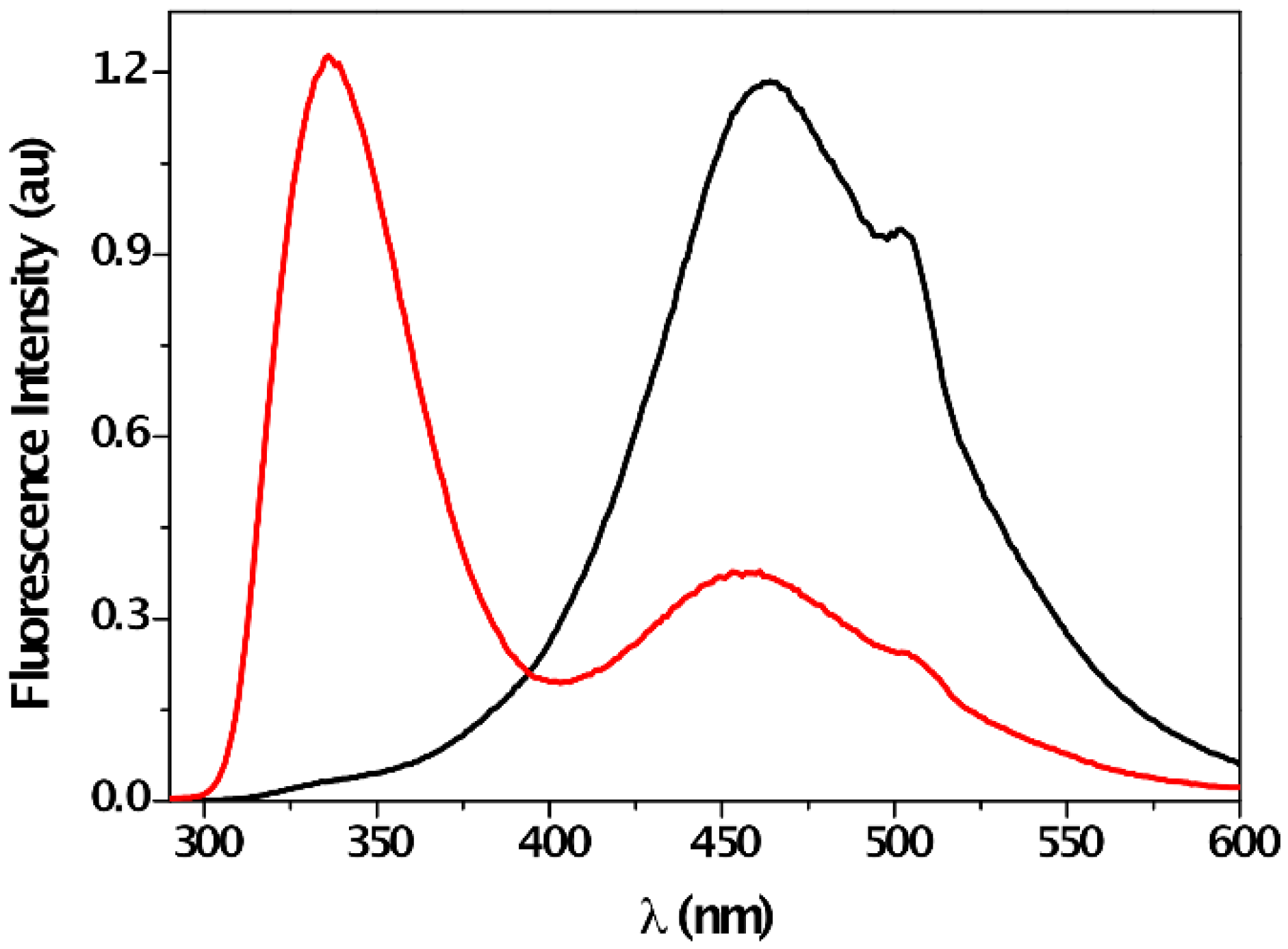