Injuries associated with fall incidences continue to pose a significant burden to persons with Parkinson’s disease (PD) both in terms of human suffering and economic loss. Freezing of gait (FOG), which is one of the symptoms of PD, is a common cause of falls in this population. Although a significant amount of work has been performed to characterize/detect FOG using both qualitative and quantitative methods, there remains paucity of data regarding real-time detection of FOG, such as the requirements for minimum sensor nodes, sensor placement locations, and appropriate sampling period and update time. Here, the continuous wavelet transform (CWT) is employed to define an index for correctly identifying FOG. Since the CWT method uses both time and frequency components of a waveform in comparison to other methods utilizing only the frequency component, we hypothesized that using this method could lead to a significant improvement in the accuracy of FOG detection. We tested the proposed index on the data of 10 PD patients who experience FOG. Two hundred and thirty seven (237) FOG events were identified by the physiotherapists. The results show that the index could discriminate FOG in the anterior–posterior axis better than other two axes, and is robust to the update time variability. These results suggest that real time detection of FOG may be realized by using CWT of a single shank sensor with window size of 2 s and update time of 1 s (82.1% and 77.1% for the sensitivity and specificity, respectively). Although implicated, future studies should examine the utility of this method in real-time detection of FOG. View Full-Text
Keywords: Parkinson’s disease; freezing of gait; continuous wavelet transform; wireless sensors; fall Parkinson’s disease; freezing of gait; continuous wavelet transform; wireless sensors; fall
►▼ Show Figures 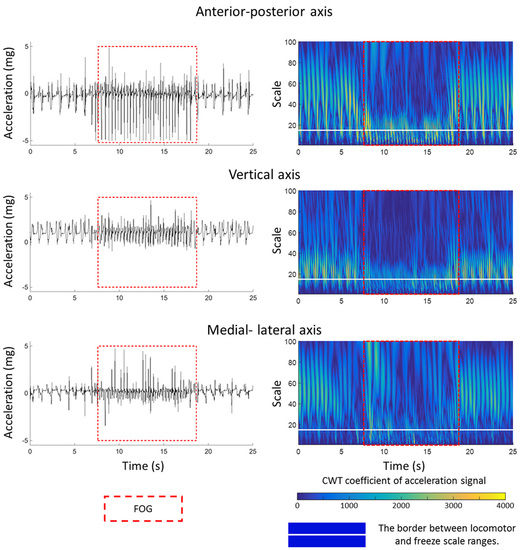