The paper presents the potential of an electronic nose technique in the field of fast diagnostics of patients suspected of Chronic Obstructive Pulmonary Disease (COPD). The investigations were performed using a simple electronic nose prototype equipped with a set of six semiconductor sensors manufactured by FIGARO Co. They were aimed at verification of a possibility of differentiation between model reference mixtures with potential COPD markers (N,N-dimethylformamide and N,N-dimethylacetamide). These mixtures contained volatile organic compounds (VOCs) such as acetone, isoprene, carbon disulphide, propan-2-ol, formamide, benzene, toluene, acetonitrile, acetic acid, dimethyl ether, dimethyl sulphide, acrolein, furan, propanol and pyridine, recognized as the components of exhaled air. The model reference mixtures were prepared at three concentration levels—10 ppb, 25 ppb, 50 ppb v/v—of each component, except for the COPD markers. Concentration of the COPD markers in the mixtures was from 0 ppb to 100 ppb v/v. Interpretation of the obtained data employed principal component analysis (PCA). The investigations revealed the usefulness of the electronic device only in the case when the concentration of the COPD markers was twice as high as the concentration of the remaining components of the mixture and for a limited number of basic mixture components. View Full-Text
Keywords: electronic nose; VOC; MOS; PCA; COPD electronic nose; VOC; MOS; PCA; COPD
►▼ Show Figures 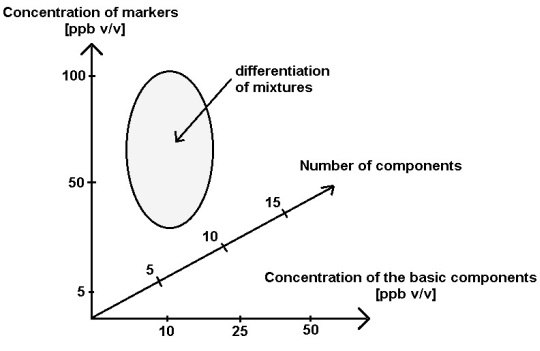