Ecology, Phylogeny, and Potential Nutritional and Medicinal Value of a Rare White “Maitake” Collected in a Mediterranean Forest

Alluvial forests dominated by black alder (Alnus glutinosa) are widespread in Europe along river banks and watercourses forming a habitat of renowned ecological/conservation importance. Despite the considerable interest this habitat has attracted in terms of the associated fungal diversity, very few pertinent data are available from the eastern Mediterranean. Andros island (Aegean Sea, Greece) hosts the southernmost population of A. glutinosa in the Balkan Peninsula; such stands have been systematically inventoried for several years in respect to macrofungi. In total, 187 specimens were collected and studied by examining morphoanatomic features and by evaluating (when necessary) the outcome of sequencing the internal transcribed spacer (ITS) region of nuclear ribosomal DNA (nrDNA) to elucidate their identity and obtain an insight into phylogenetic relationships. As a result, 106 species were recorded, 92 are saprotrophic and 14 form ectomycorrhizae (ECM) with alders. Twenty-one species are first national records, while 68 other species are reported for the first time from this habitat in Greece. Several findings of particular interest due to their rarity, ecological preferences and/or taxonomic status are presented in detail and discussed, e.g., six Alnicola taxa, Cortinarius americanus, Lactarius obscuratus, Paxillus olivellus and Russula pumila (among the ECMs), and the saprotrophs Entoloma uranochroum, Gymnopilus arenophilus, Hyphoderma nemorale, Lepiota ochraceofulva, Phanerochaete livescens and Psathyrella hellebosensis. View Full-Text
Keywords: macrofungi; Basidiomycota; mushroom diversity; ectomycorrhiza; saprotroph; alder; Aegean Sea; Mediterranean; Alnicola macrofungi; Basidiomycota; mushroom diversity; ectomycorrhiza; saprotroph; alder; Aegean Sea; Mediterranean; Alnicola
►▼ Show Figures 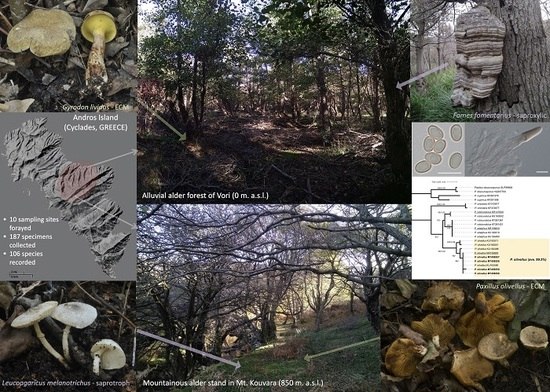