Evidence for Wide Dispersal in a Stem Galliform Clade from a New Small-Sized Middle Eocene Pangalliform (Aves: Paraortygidae) from the Uinta Basin of Utah (USA)
Previous Article in Journal

Buffelgrass (Cenchrus ciliaris L.) is an important forage grass widely grown across the world with many good characteristics including high biomass yield, drought tolerance, and adaptability to a wide range of soil conditions and agro-ecologies. Two hundred and five buffelgrass accessions from diverse origins, conserved as part of the in-trust collection in the ILRI genebank, were analyzed by genotyping-by-sequencing using the DArTseq platform. The genotyping generated 234,581 single nucleotide polymorphism (SNP) markers, with polymorphic information content (PIC) values ranging from 0.005 to 0.5, and the short sequences of the markers were aligned with foxtail millet (Setaria italica) as a reference genome to generate genomic map positions of the markers. One thousand informative SNP markers, representing a broad coverage of the reference genome and with an average PIC value of 0.35, were selected for population structure and diversity analyses. The population structure analysis suggested two main groups, while the hierarchical clustering showed up to eight clusters in the collection. A representative core collection containing 20% of the accessions in the collection, with germplasm from 10 African countries and Oman, was developed. In general, the study revealed the presence of considerable genetic diversity and richness in the collection and a core collection that could be used for further analysis for specific traits of interest. View Full-Text
Keywords: buffelgrass (Cenchrus ciliaris); core collection; genotyping-by-sequencing; genetic diversity; SNP markers buffelgrass (Cenchrus ciliaris); core collection; genotyping-by-sequencing; genetic diversity; SNP markers
►▼ Show Figures 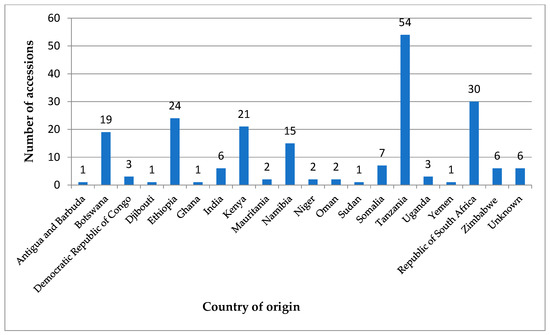