Evidence for Wide Dispersal in a Stem Galliform Clade from a New Small-Sized Middle Eocene Pangalliform (Aves: Paraortygidae) from the Uinta Basin of Utah (USA)

A new bird coracoid from the Uinta Formation in the Uinta Basin in Utah (USA) records the presence of the only known pangalliform from the middle Eocene of North America, occurring in a >15 million year gap in their history. This fossil represents a new taxon, informally termed the Uintan paraortygid, which is also currently the best-supported record of the extinct Paraortygidae in North America (and among the oldest records of the group in the world). The specimen exhibits a derived enlarged procoracoid prominence with a small procoracoid process, and concave elliptical scapular cotyle that are shared with the middle Eocene paraortygids, Xorazmortyx and Scopelortyx; however, the Uintan paraortygid also has a possibly autapomorphic (pneumatic) fossa adjacent to the scapular cotyle. The similarity in body size and morphology among these widely distributed early paraortygids suggests phylogenetic affinity among them. Given their occurrence in the United States, Uzbekistan, and Namibia during the middle Eocene, these birds likely were good fliers with an increased ability to disperse; and probably had a flexible biology or diet allowing them to occupy a diversity of habitats from coasts and forests to semi-arid savannah-like habitats. The problematic early records of Odontophoridae need to be reexamined as potential members of Paraortygidae and associates of these small-bodied taxa. View Full-Text
Keywords: coracoid; dispersal; Eocene; Galliformes; Paraortygidae; Uinta Formation; Utah coracoid; dispersal; Eocene; Galliformes; Paraortygidae; Uinta Formation; Utah
►▼ Show Figures 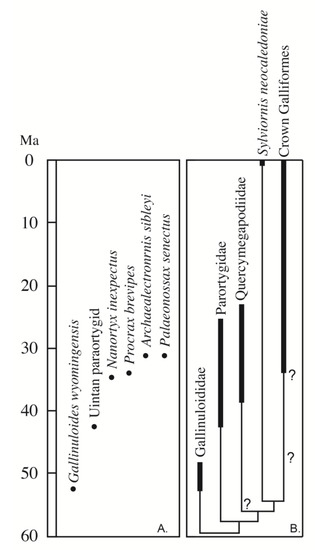 
Stidham, Thomas A.; Townsend, K.E. B.; Holroyd, Patricia A. 2020. "Evidence for Wide Dispersal in a Stem Galliform Clade from a New Small-Sized Middle Eocene Pangalliform (Aves: Paraortygidae) from the Uinta Basin of Utah (USA)." Diversity 12, no. 3: 90.