The Legacy of the Past Logging: How Forest Structure Affects Different Facets of Understory Plant Diversity in Abandoned Coppice Forests
Next Article in Special Issue

Contribution to the Knowledge on Distribution of Tardigrada in Turkey

New Records of Antarctic Tardigrada with Comments on Interpopulation Variability of the Paramacrobiotus fairbanksi Schill, Förster, Dandekar and Wolf, 2010

Studies on Antarctic tardigrades started at the beginning of the twentieth century and have progressed very slowly and ca. 75 tardigrade species are known from this region. Paramacrobiotus fairbanksi was described from USA based on genetic markers and later reported from Italy, Poland, and Spain. The “everything is everywhere” hypothesis suggests that microscopic organisms have specific features which help them to inhabit most of environments and due to this they can be considered cosmopolitan. In the present paper, we report eight tardigrade taxa from Antarctic, including the first report of Pam. fairbanksi from Southern Hemisphere, which could suggest that the “everything is everywhere” hypothesis could be true, at least for some tardigrade species. Moreover, we also genetically and morphologically compare a few different populations of Pam. fairbanksi. The p-distances between COI haplotypes of all sequenced Pam. fairbanksi populations from Antarctica, Italy, Spain, USA and Poland ranged from 0.002% to 0.005%. In the case of COI polymorphism analyses, only one haplotype was observed in populations from Antarctica, USA and Poland, two haplotypes were found in population from Spain, and six haplotypes were observed in population from Italy. We also found some statistically significant morphometrical differences between the populations of Pam. fairbanksi from different regions and designed a new specific primers for Paramacrobiotus taxa. View Full-Text
Keywords: cosmopolitism; dispersal; zoogeography; “everything is everywhere” hypothesis, fauna; water bears cosmopolitism; dispersal; zoogeography; “everything is everywhere” hypothesis, fauna; water bears
►▼ Show Figures 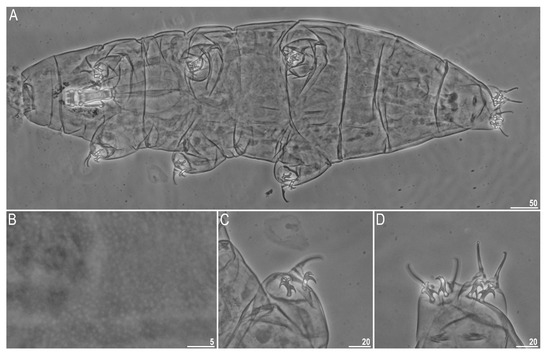