Catastrophic wildfire is increasingly common in forests of the western United States because climate change is increasing ambient temperatures and periods of drought. In 2011, the Las Conchas wildfire burned in the Santa Fe National Forest of New Mexico, including portions of ponderosa pine and mixed-conifer forests, and grasslands in the Valles Caldera National Preserve, a large, high-elevation volcanic caldera. Following the fire, Caldera staff began monitoring abiotic, plant, and animal responses. In this study, ground-dwelling arachnids were collected in pitfall traps in burned and unburned habitats from 2011–2015. Permutational multivariate analysis of variance (PERMANOVA) mostly at the genus level with some higher taxon levels showed significant fire, year, and interaction effects. Abundance was at or near unburned levels by 2014, but species composition changed in burned areas. Pardosa and Haplodrassus were dominant genera across habitats. Linyphiids were strong indicators of unburned sites. Harvestmen were among the dominant species in the forest habitats, and erythraeid mites were abundant in the burned ponderosa pine forest and the grassland. Years were not significantly autocorrelated, unsurprising given the interannual variation in precipitation in this generally arid region. Although fire is a common feature of these habitats, future fires may be outside of historical patterns, preventing spider communities from re-establishing fully. View Full-Text
Keywords: Araneae; Acari; Opiliones; wildfire; forests; New Mexico; pitfall trapping Araneae; Acari; Opiliones; wildfire; forests; New Mexico; pitfall trapping
►▼ Show Figures 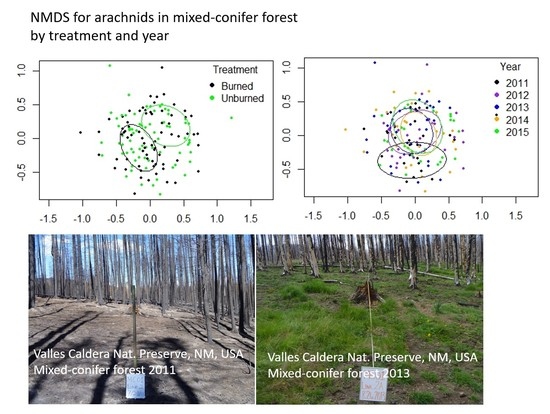