Hypogean Communities as Cybernetic Systems: Implications for the Evolution of Cave Biotas
Previous Article in Journal

Animals in many phyla are adapted to and thrive in the constant darkness of subterranean environments. To do so, cave animals have presumably evolved mechano- and chemosensory compensations to the loss of vision, as is the case for the blind characiform cavefish, Astyanax mexicanus. Here, we systematically assessed the olfactory capacities of cavefish and surface fish of this species in the lab as well as in the wild, in five different caves in northeastern Mexico, using an olfactory setup specially developed to test and record olfactory responses during fieldwork. Overall cavefish showed lower (i.e., better) olfactory detection thresholds than surface fish. However, wild adult cavefish from the Pachón, Sabinos, Tinaja, Chica and Subterráneo caves showed highly variable responses to the three different odorant molecules they were exposed to. Pachón and Subterráneo cavefish showed the highest olfactory capacities, and Chica cavefish showed no response to the odors presented. We discuss these data with regard to the environmental conditions in which these different cavefish populations live. Our experiments in natural settings document the diversity of cave environments inhabited by a single species of cavefish, A. mexicanus, and highlight the complexity of the plastic and genetic mechanisms that underlie cave adaptation. View Full-Text
Keywords: fieldwork; wild fish; comparative biology; behavior; troglomorphism; olfactory test; infrared movies; amino acids; chondroitin; plasticity fieldwork; wild fish; comparative biology; behavior; troglomorphism; olfactory test; infrared movies; amino acids; chondroitin; plasticity
►▼ Show Figures 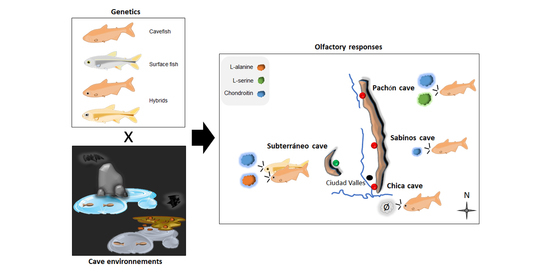