Harvesting Criteria Application as a Technical and Financial Alternative for Management of Degraded Tropical Forests: A Case Study from Brazilian Amazon
Previous Article in Journal

The recent accelerated ocean acidification and global warming caused by increased atmospheric carbon dioxide may have an impact on the physiology and ecology of marine animals. This study was conducted to determine the egg production rate (EPR) and hatching success (EHS) of Acartia ohtsukai in response to the combined effects of an increase in temperature and a lower pH. Acartiaohtsukai with fresh surface seawater were collected in the northwestern Yeoja Bay of Korea in September 2017. The temperature and pH conditions applied included two different pH levels (representing the present: 7.9 and the future: 7.6) and three temperature values (26 °C, 28 °C, and 30 °C). In the pH 7.9, EPR significantly increased with increased temperature, but in pH 7.6, it significantly decreased as the temperature increased. EHS was lower in pH 7.6 than in pH 7.9. These results suggest that changes in the marine environment due to global warming and ocean acidification may affect Acartia populations and cause overall fluctuations in copepods of the genus Acartia. View Full-Text
Keywords: ocean acidification; global warming; egg production rate; egg hatching success; Acartia ohtsukai ocean acidification; global warming; egg production rate; egg hatching success; Acartia ohtsukai
►▼ Show Figures 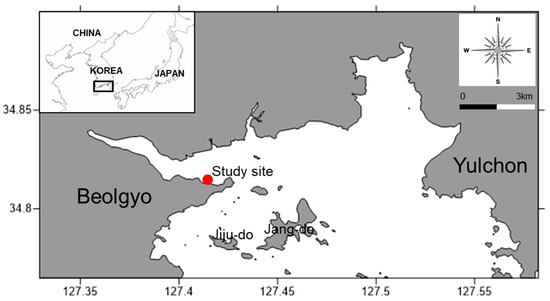