The Evolution of Dragline Initiation in Spiders: Multiple Transitions from Multi- to Single-Gland Usage

Despite the recognition of spider silk as a biological super-material and its dominant role in various aspects of a spider’s life, knowledge on silk use and silk properties is incomplete. This is a major impediment for the general understanding of spider ecology, spider silk evolution and biomaterial prospecting. In particular, the biological role of different types of silk glands is largely unexplored. Here, I report the results from a comparative study of spinneret usage during silk anchor and dragline spinning. I found that the use of both anterior lateral spinnerets (ALS) and posterior median spinnerets (PMS) is the plesiomorphic state of silk anchor and dragline spinning in the Araneomorphae, with transitions to ALS-only use in the Araneoidea and some smaller lineages scattered across the spider tree of life. Opposing the reduction to using a single spinneret pair, few taxa have switched to using all ALS, PMS and the posterior lateral spinnerets (PLS) for silk anchor and dragline formation. Silk fibres from the used spinnerets (major ampullate, minor ampullate and aciniform silk) were generally bundled in draglines after the completion of silk anchor spinning. Araneoid spiders were highly distinct from most other spiders in their draglines, being composed of major ampullate silk only. This indicates that major ampullate silk properties reported from comparative measurements of draglines should be handled with care. These observations call for a closer investigation of the function of different silk glands in spiders. View Full-Text
Keywords: spider silk; spinneret; major ampullate silk; minor ampullate silk; aciniform silk; piriform silk spider silk; spinneret; major ampullate silk; minor ampullate silk; aciniform silk; piriform silk
►▼ Show Figures 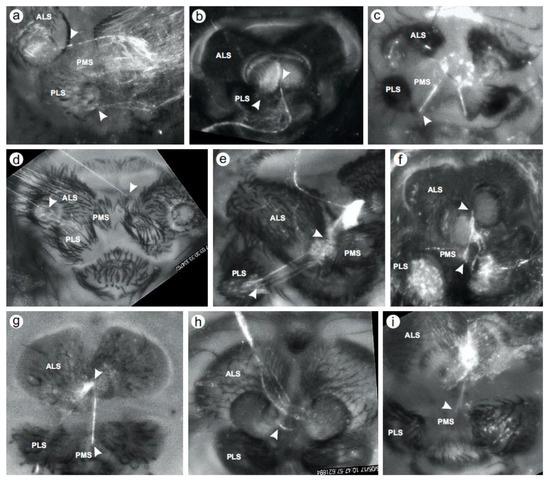 
Wolff, Jonas O. 2020. "The Evolution of Dragline Initiation in Spiders: Multiple Transitions from Multi- to Single-Gland Usage." Diversity 12, no. 1: 4.