Bacterial exopolysaccharide (EPS) formation is crucial for biofilm formation, for protection against environmental factors, or as storage compounds. EPSs produced by lactic acid bacteria (LAB) are appropriate for applications in food fermentation or the pharmaceutical industry, yet the dynamics of formation and degradation thereof are poorly described. This study focuses on carbohydrate active enzymes, including glycosyl transferases (GT) and glycoside hydrolases (GH), and their roles in the formation and potential degradation of O2-substituted (1,3)-β-D-glucan of Levilactobacillus (L.) brevis TMW 1.2112. The fermentation broth of L. brevis TMW 1.2112 was analyzed for changes in viscosity, β-glucan, and D-glucose concentrations during the exponential, stationary, and early death phases. While the viscosity reached its maximum during the stationary phase and subsequently decreased, the β-glucan concentration only increased to a plateau. Results were correlated with secretome and proteome data to identify involved enzymes and pathways. The suggested pathway for β-glucan biosynthesis involved a β-1,3 glucan synthase (GT2) and enzymes from maltose phosphorylase (MP) operons. The decreased viscosity appeared to be associated with cell lysis as the β-glucan concentration did not decrease, most likely due to missing extracellular carbohydrate active enzymes. In addition, an operon was discovered containing known moonlighting genes, all of which were detected in both proteome and secretome samples. View Full-Text
Keywords: Levilactobacillus brevis TMW 1.2112; β-glucan; exopolysaccharide; glycosyltransferase; glycosyl hydrolase; moonlighting proteins; secretome; proteome Levilactobacillus brevis TMW 1.2112; β-glucan; exopolysaccharide; glycosyltransferase; glycosyl hydrolase; moonlighting proteins; secretome; proteome
►▼ Show Figures 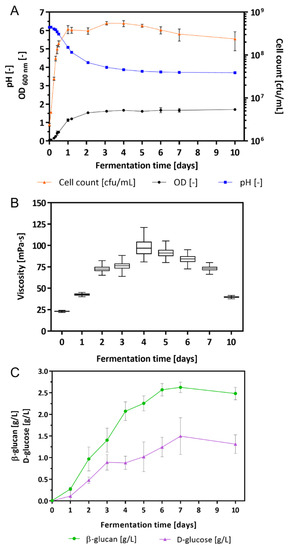