Anti-Infective and Anti-Inflammatory Mode of Action of Peptide 19-2.5
Next Article in Special Issue

Characterization of the FLAVIN-BINDING, KELCH REPEAT, F-BOX 1 Homolog SlFKF1 in Tomato as a Model for Plants with Fleshy Fruit
Previous Article in Journal

In plants, mTERF proteins are primarily found in mitochondria and chloroplasts. Studies have identified several mTERF proteins that affect plant development, respond to abiotic stresses, and regulate organellar gene expression, but the functions and underlying mechanisms of plant mTERF proteins remain largely unknown. Here, we investigated the function of Arabidopsis mTERF27 using molecular genetic, cytological, and biochemical approaches. Arabidopsis mTERF27 had four mTERF motifs and was evolutionarily conserved from moss to higher plants. The phenotype of the mTERF27-knockout mutant mterf27 did not differ obviously from that of the wild-type under normal growth conditions but was hypersensitive to salt stress. mTERF27 was localized to the mitochondria, and the transcript levels of some mitochondrion-encoded genes were reduced in the mterf27 mutant. Importantly, loss of mTERF27 function led to developmental defects in the mitochondria under salt stress. Furthermore, mTERF27 formed homomers and directly interacted with multiple organellar RNA editing factor 8 (MORF8). Thus, our results indicated that mTERF27 is likely crucial for mitochondrial development under salt stress, and that this protein may be a member of the protein interaction network regulating mitochondrial gene expression. View Full-Text
Keywords: Arabidopsis; mTERF27; MORF8; salt stress; mitochondrial morphology Arabidopsis; mTERF27; MORF8; salt stress; mitochondrial morphology
►▼ Show Figures 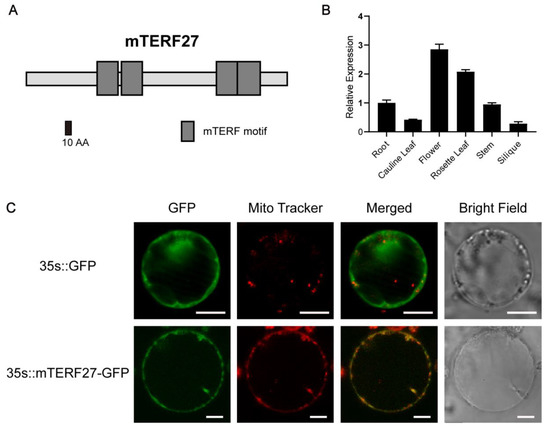