The Kynurenine Pathway as a Potential Target for Neuropathic Pain Therapy Design: From Basic Research to Clinical Perspectives
Previous Article in Special Issue

The Emerging Role of Stress Granules in Hepatocellular Carcinoma

Post-transcriptional modifications to coding and non-coding RNAs are unquestionably a pivotal way in which human mRNA and protein diversity can influence the different phases of a transcript’s life cycle. CELF (CUGBP Elav-like family) proteins are RBPs (RNA-binding proteins) with pleiotropic capabilities in RNA processing. Their responsibilities extend from alternative splicing and transcript editing in the nucleus to mRNA stability, and translation into the cytoplasm. In this way, CELF family members have been connected to global alterations in cancer proliferation and invasion, leading to their identification as potential tumor suppressors or even oncogenes. Notably, genetic variants, alternative splicing, phosphorylation, acetylation, subcellular distribution, competition with other RBPs, and ultimately lncRNAs, miRNAs, and circRNAs all impact CELF regulation. Discoveries have emerged about the control of CELF functions, particularly via noncoding RNAs, and CELF proteins have been identified as competing, antagonizing, and regulating agents of noncoding RNA biogenesis. On the other hand, CELFs are an intriguing example through which to broaden our understanding of the RBP/noncoding RNA regulatory axis. Balancing these complex pathways in cancer is undeniably pivotal and deserves further research. This review outlines some mechanisms of CELF protein regulation and their functional consequences in cancer physiology. View Full-Text
Keywords: CELF proteins; RNA-binding protein; noncoding RNA; cancer CELF proteins; RNA-binding protein; noncoding RNA; cancer
►▼ Show Figures 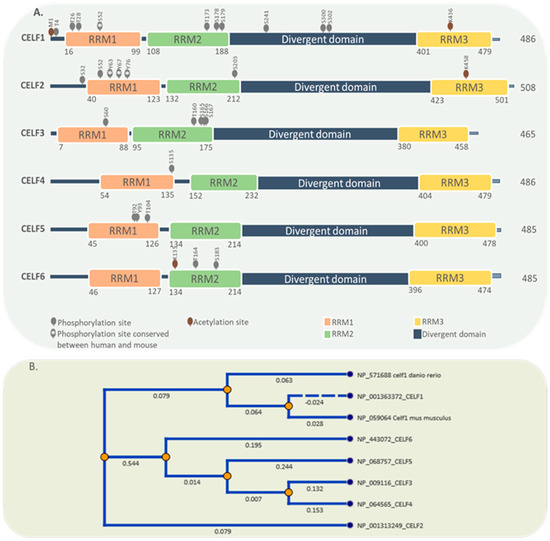 Luis Felipe Jave-Suárez
Dr. Luis Felipe Jave-Suarez is a Principal Researcher at the Division of Immunology of the West Biomedical Research Center of IMSS, Guadalajara, Mexico. He obtained his first degree in biology at the Ricardo Palma University in Lima, Peru. Later he was awarded Master of Science at the Department of Genetic and Molecular Biology, Center for Research and Advanced Studies of the IPN in Mexico. He earned his doctorate at the Faculty of Biology of the Ruprecht-Karls-Universität in Heidelberg, Germany, and then had two postdoctoral fellowships. These were in France at the Institut de Biologie et de Genetique Moleculaire et Cellulaire, in the working group of Prof. Pierre Chambon; and at the German Cancer Research Center in the working group of Dr. Hab. Juergen Schweizer. He is involved in the search of biomarkers for the early diagnosis or prognosis of neoplasias.
Zoom | Orient | As Lines | As Sticks | As Cartoon | As Surface | Previous Scene | Next Scene
We use cookies on our website to ensure you get the best experience. Read more about our cookies here.
Accept
We have just recently launched a new version of our website. Help us to further improve by taking part in this short 5 minute survey here. here.
Never show this again