A cis-Acting Mutation in the PxABCG1 Promoter Is Associated with Cry1Ac Resistance in Plutella xylostella (L.)

Infection by Proteus mirabilis causes urinary stones and catheter incrustation due to ammonia formed by urease (PMU), one of its virulence factors. Non-enzymatic properties, such as pro-inflammatory and neurotoxic activities, were previously reported for distinct ureases, including that of the gastric pathogen Helicobacter pylori. Here, PMU was assayed on isolated cells to evaluate its non-enzymatic properties. Purified PMU (nanomolar range) was tested in human (platelets, HEK293 and SH-SY5Y) cells, and in murine microglia (BV-2). PMU promoted platelet aggregation. It did not affect cellular viability and no ammonia was detected in the cultures’ supernatants. PMU-treated HEK293 cells acquired a pro-inflammatory phenotype, producing reactive oxygen species (ROS) and cytokines IL-1β and TNF-α. SH-SY5Y cells stimulated with PMU showed high levels of intracellular Ca2+ and ROS production, but unlike BV-2 cells, SH-SY5Y did not synthesize TNF-α and IL-1β. Texas Red-labeled PMU was found in the cytoplasm and in the nucleus of all cell types. Bioinformatic analysis revealed two bipartite nuclear localization sequences in PMU. We have shown that PMU, besides urinary stone formation, can potentially contribute in other ways to pathogenesis. Our data suggest that PMU triggers pro-inflammatory effects and may affect cells beyond the renal system, indicating a possible role in extra-urinary diseases. View Full-Text
Keywords: Proteus mirabilis; urease; virulence factors; pathogenesis Proteus mirabilis; urease; virulence factors; pathogenesis
►▼ Show Figures 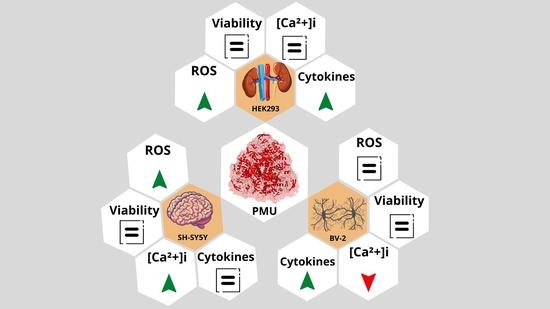