Immunostimulatory Effects of Radiotherapy for Local and Systemic Control of Melanoma: A Review

The Abscopal Effect in the Era of Checkpoint Inhibitors

Therapy targeting immune checkpoints represents an integral part of the treatment for patients suffering from advanced melanoma. However, the mechanisms of resistance are responsible for a lower therapeutic outcome than expected. Concerning melanoma, insufficient stimulation of the immune system by tumour neoantigens is a likely explanation. As shown previously, radiotherapy is a known option for increasing the production of tumour neoantigens and their release into the microenvironment. Consequently, neoantigens could be recognized by antigen presenting cells (APCs) and subjected to effector T lymphocytes. Enhancing the immune reaction can trigger the therapeutic response also at distant metastases, a phenomenon known as an abscopal effect (from “ab scopus”, that is, away from the target). To illustrate this, we present the case of a 78-year old male treated by anti-CTLA-4/ipilimumab for metastatic melanoma. The patient received the standard four doses of ipilimumab administered every three weeks. However, the control CT scans detected disease progression in the form of axillary lymph nodes metastasis and liver metastasis two months after ipilimumab. At this stage, palliative cryotherapy of the skin metastases was initiated to alleviate the tumour burden. Surprisingly, the effect of cryotherapy was also observed in untreated metastases and deep subcutaneous metastases on the back. Moreover, we observed the disease remission of axillary lymph nodes and liver metastasis two months after the cryotherapy. The rarity of the abscopal effect suggests that even primed anti-tumour CD8+ T cells cannot overcome the tumour microenvironment’s suppressive effect and execute immune clearance. However, the biological mechanism underlying this phenomenon is yet to be elucidated. The elicitation of a systemic response by cryotherapy with documented abscopal effect was rarely reported, although the immune response induction is presumably similar to a radiotherapy-induced one. The report is a combination case study and review of the abscopal effect in melanoma treated with checkpoint inhibitors. View Full-Text
Keywords: abscopal effect; cryotherapy; anti-CTLA-4; melanoma; tumor neoantigens; wound healing abscopal effect; cryotherapy; anti-CTLA-4; melanoma; tumor neoantigens; wound healing
►▼ Show Figures 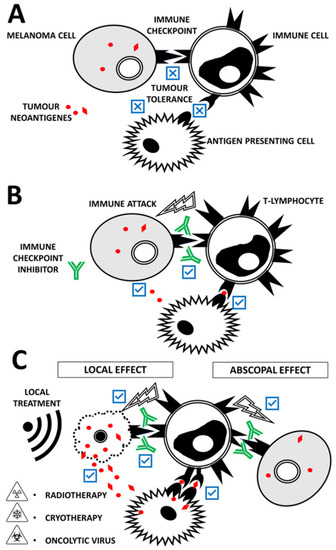 Lukáš Lacina
https://www.scopus.com/authid/detail.uri?authorId=12764651100
Zoom | Orient | As Lines | As Sticks | As Cartoon | As Surface | Previous Scene | Next Scene
We use cookies on our website to ensure you get the best experience. Read more about our cookies here.
Accept
We have just recently launched a new version of our website. Help us to further improve by taking part in this short 5 minute survey here. here.
Never show this again