30 Hz, Could It Be Part of a Window Frequency for Cellular Response?
Previous Article in Journal

With the rapid growth of wireless communication devices, the influences of electromagnetic fields (EMF) on human health are gathering increasing attention. Since the skin is the largest organ of the body and is located at the outermost layer, it is considered a major target for the health effects of EMF. Skin pigmentation represents one of the most frequent symptoms caused by various non-ionizing radiations, including ultraviolet radiation, blue light, infrared, and extremely low frequency (ELF). Here, we investigated the effects of EMFs with long-term evolution (LTE, 1.762 GHz) and 5G (28 GHz) bandwidth on skin pigmentation in vitro. Murine and Human melanoma cells (B16F10 and MNT-1) were exposed to either LTE or 5G for 4 h per day, which is considered the upper bound of average smartphone use time. It was shown that neither LTE nor 5G exposure induced significant effects on cell viability or pigmentation. The dendrites of MNT-1 were neither lengthened nor regressed after EMF exposure. Skin pigmentation effects of EMFs were further examined in the human keratinocyte cell line (MNT-1-HaCaT) co-culture system, which confirmed the absence of significant hyper-pigmentation effects of LTE and 5G EMFs. Lastly, MelanoDerm™, a 3D pigmented human epidermis model, was irradiated with LTE (1.762 GHz) or 5G (28 GHz), and image analysis and special staining were performed. No changes in the brightness of MelanoDerm™ tissues were observed in LTE- or 5G-exposed tissues, except for only minimal changes in the size of melanocytes. Collectively, these results imply that exposure to LTE and 5G EMFs may not affect melanin synthesis or skin pigmentation under normal smartphone use condition. View Full-Text
Keywords: skin pigmentation; melanogenesis; artificial human epidermis; electromagnetic waves; LTE; 5G skin pigmentation; melanogenesis; artificial human epidermis; electromagnetic waves; LTE; 5G
►▼ Show Figures 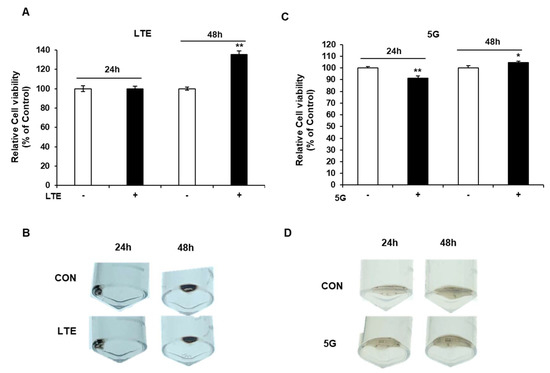