Cellular inflammation is an integral part of the healing process following acute myocardial infarction and has been under intense investigation for both therapeutic and prognostic approaches. Monocytes and macrophages are metabolically highly active and show increased uptake rates of glucose and its analog, 18F-FDG. Yet, the specific allocation of the radioactivity to the inflammatory cells via positron emission tomography (PET) imaging requires the suppression of glucose metabolism in viable myocardium. In mice, the most important model organism in basic research, this can be achieved by the application of ketamine/xylazine (KX) for anesthesia instead of isoflurane. Yet, while the consensus exists that glucose metabolism is effectively suppressed, a strategy for reproducible image analysis is grossly lacking and causes uncertainty concerning data interpretation. We introduce a simple strategy for systematic image analysis, which is a prerequisite to evaluate therapies targeting myocardial inflammation. Mice underwent permanent occlusion of the left anterior descending artery (LAD), inducing an acute myocardial infarction (MI). Five days after MI induction, 10MBq 18F-FDG was injected intravenously and a static PET/CT scan under ketamine/xylazine anesthesia was performed. For image reconstruction, we used an algorithm based on three-dimensional ordered subsets expectation maximization (3D-OSEM) followed by three-dimensional ordinary Poisson maximum a priori (MAP) reconstruction. Using this approach, high focal tracer uptake was typically located in the border zone of the infarct by visual inspection. To precisely demarcate the border zone for reproducible volume of interest (VOI) positioning, our protocol relies on positioning VOIs around the whole left ventricle, the inferobasal wall and the anterolateral wall guided by anatomical landmarks. This strategy enables comparable data in mouse studies, which is an important prerequisite for using a PET-based assessment of myocardial inflammation as a prognostic tool in therapeutic applications. View Full-Text
Keywords: FDG-PET; imaging inflammation; acute myocardial infarction; mouse model; image analysis FDG-PET; imaging inflammation; acute myocardial infarction; mouse model; image analysis
►▼ Show Figures 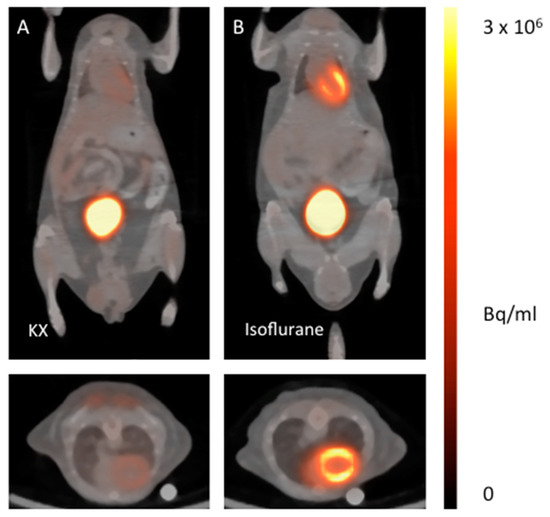