The Effects of Human BDH2 on the Cell Cycle, Differentiation, and Apoptosis and Associations with Leukemia Transformation in Myelodysplastic Syndrome
Previous Article in Special Issue

Objective: Hippocampal volume is reduced in patients with major depressive disorder (MDD) compared with healthy controls. The hippocampus is a limbic structure that has a critical role in MDD. The aim of the present study was to investigate the changes in the volume of the hippocampus and its subfields in MDD patients who responded to antidepressants and subsequently were in continuous remission. Subjects and Methods: Eighteen patients who met the following criteria were enrolled in the present study: the DSM-IV-TR criteria for MDD, drug-naïve at least 8 weeks or more, scores on the 17-items of Hamilton Rating Scale for Depression (HAMD) of 14 points or more, and antidepressant treatment response within 8 weeks and continuous remission for at least 6 months. All participants underwent T1-weighted structural MRI and were treated with antidepressants for more than 8 weeks. We compared the volumes of the hippocampus, including its subfields, in responders at baseline to the volumes at 6 months. The volumes of the whole hippocampus and the hippocampal subfields were measured using FreeSurfer v6.0. Results: The volumes of the left cornu Ammonis (CA) 3 (p = 0.016) and the granule cell layer of the dentate gyrus (GC-DG) region (p = 0.021) were significantly increased after 6 months of treatment compared with those at baseline. Conclusions: Increases in volume was observed in MDD patients who were in remission for at least 6 months. View Full-Text
Keywords: brain morphology; major depressive disorder; hippocampus; cornu Ammonis; dentate gyrus; antidepressant brain morphology; major depressive disorder; hippocampus; cornu Ammonis; dentate gyrus; antidepressant
►▼ Show Figures 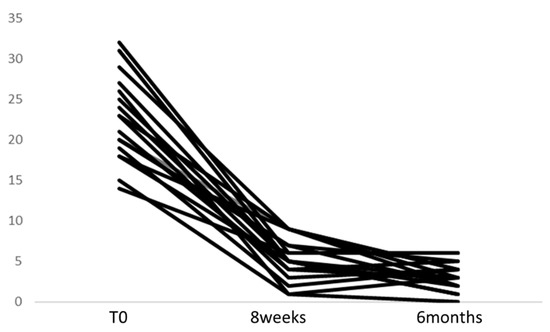