A Survey of Antimicrobial Resistance Determinants in Category A Select Agents, Exempt Strains, and Near-Neighbor Species
Next Article in Special Issue

Identification and Characterization of the First Virulent Phages, Including a Novel Jumbo Virus, Infecting Ochrobactrum spp.
Previous Article in Journal

The bacterial virus lambda (λ) is a temperate bacteriophage that can lysogenize host Escherichia coli (E. coli) cells. Lysogeny requires λ repressor, the cI gene product, which shuts off transcription of the phage genome. The λ N protein, in contrast, is a transcriptional antiterminator, required for expression of the terminator-distal genes, and thus, λ N mutants are growth-defective. When E. coli is infected with a λ double mutant that is defective in both N and cI (i.e., λN-cI-), at high multiplicities of 50 or more, it forms polylysogens that contain 20–30 copies of the λN-cI- genome integrated in the E. coli chromosome. Early studies revealed that the polylysogens underwent “conversion” to long filamentous cells that form tiny colonies on agar. Here, we report a large set of altered biochemical properties associated with this conversion, documenting an overall degeneration of the bacterial envelope. These properties reverted back to those of nonlysogenic E. coli as the metastable polylysogen spontaneously lost the λN-cI- genomes, suggesting that conversion is a direct result of the multiple copies of the prophage. Preliminary attempts to identify lambda genes that may be responsible for conversion ruled out several candidates, implicating a potentially novel lambda function that awaits further studies. View Full-Text
Keywords: bacteriophage lambda; polylysogen; membrane; Gram-negative; lipopolysaccharide; lysogenic conversion bacteriophage lambda; polylysogen; membrane; Gram-negative; lipopolysaccharide; lysogenic conversion
►▼ Show Figures 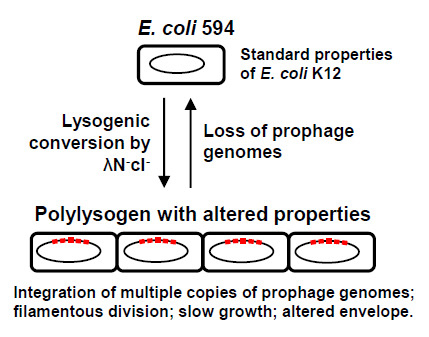