It is known that growth hormone (GH) is expressed in immune cells, where it exerts immunomodulatory effects. However, the mechanisms of expression and release of GH in the immune system remain unclear. We analyzed the effect of growth hormone-releasing hormone (GHRH), thyrotropin-releasing hormone (TRH), ghrelin (GHRL), and somatostatin (SST) upon GH mRNA expression, intracellular and released GH, Ser133-phosphorylation of CREB (pCREBS133), intracellular Ca2+ levels, as well as B-cell activating factor (BAFF) mRNA expression in bursal B-lymphocytes (BBLs) cell cultures since several GH secretagogues, as well as their corresponding receptors (-R), are expressed in B-lymphocytes of several species. The expression of TRH/TRH-R, ghrelin/GHS-R1a, and SST/SST-Rs (Subtypes 1 to 5) was observed in BBLs by RT-PCR and immunocytochemistry (ICC), whereas GHRH/GHRH-R were absent in these cells. We found that TRH treatment significantly increased local GH mRNA expression and CREB phosphorylation. Conversely, SST decreased GH mRNA expression. Additionally, when added together, SST prevented TRH-induced GH mRNA expression, but no changes were observed in pCREBS133 levels. Furthermore, TRH stimulated GH release to the culture media, while SST increased the intracellular content of this hormone. Interestingly, SST inhibited TRH-induced GH release in a dose-dependent manner. The coaddition of TRH and SST decreased the intracellular content of GH. After 10 min. of incubation with either TRH or SST, the intracellular calcium levels significantly decreased, but they were increased at 60 min. However, the combined treatment with both peptides maintained the Ca2+ levels reduced up to 60-min. of incubation. On the other hand, BAFF cytokine mRNA expression was significantly increased by TRH administration. Altogether, our results suggest that TRH and SST are implicated in the regulation of GH expression and release in BBL cultures, which also involve changes in pCREBS133 and intracellular Ca2+ concentration. It is likely that TRH, SST, and GH exert autocrine/paracrine immunomodulatory actions and participate in the maturation of chicken BBLs. View Full-Text
Keywords: bursa of fabricius; growth hormone; bursal B-lymphocytes; TRH; somatostatin; GHRH bursa of fabricius; growth hormone; bursal B-lymphocytes; TRH; somatostatin; GHRH
►▼ Show Figures 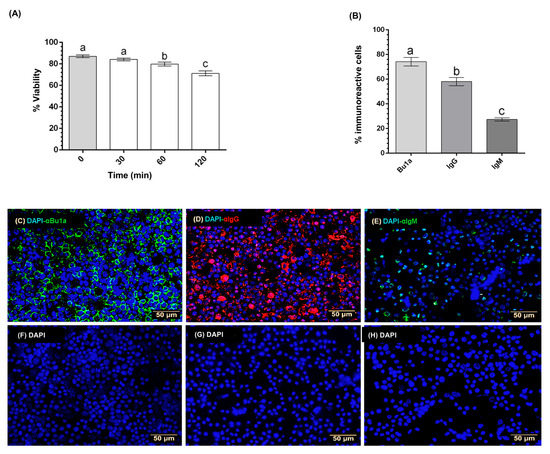