Dysfunction of the tumor suppressor p53 occurs in most human cancers. Mdm2 and MdmX are homologous proteins from the Mdm (Murine Double Minute) protein family, which play a critical role in p53 inactivation and degradation. The two proteins interact with one another via the intrinsic RING (Really Interesting New Gene) domains to achieve the negative regulation of p53. The downregulation of p53 is accomplished by Mdm2-mediated p53 ubiquitination and proteasomal degradation through the ubiquitin proteolytic system and by Mdm2 and MdmX mediated inhibition of p53 transactivation. To investigate the role of the RING domain of Mdm2 and MdmX, an analysis of the distinct functionalities of individual RING domains of the Mdm proteins on p53 regulation was conducted in human osteosarcoma (U2OS) cell line. Mdm2 RING domain was observed mainly localized in the cell nucleus, contrasting the localization of MdmX RING domain in the cytoplasm. Mdm2 RING was found to possess an endogenous E3 ligase activity, whereas MdmX RING did not. Both Mdm2 and MdmX RING domains were able to dimerize with endogenous full-length Mdm2 and MdmX protein and affect their cellular function. The results showed that overexpression of the Mdm2 or MdmX RING domains interfered with the endogenous full-length Mdm2 and MdmX activity and resulted in p53 stabilization and p53 target gene activation. However, both Mdm RING domains showed oncogenic activity in a colony formation assay, suggesting that the Mdm RING domains possess p53-independent oncogenic properties. This study highlights the distinct structural and functional traits of the RING domain of Mdm2 and MdmX and characterized their role in cellular responses through interfering with p53 dependent signaling pathway. View Full-Text
Keywords: Mdm2; MdmX; RING domain; the ubiquitin proteolytic system Mdm2; MdmX; RING domain; the ubiquitin proteolytic system
►▼ Show Figures 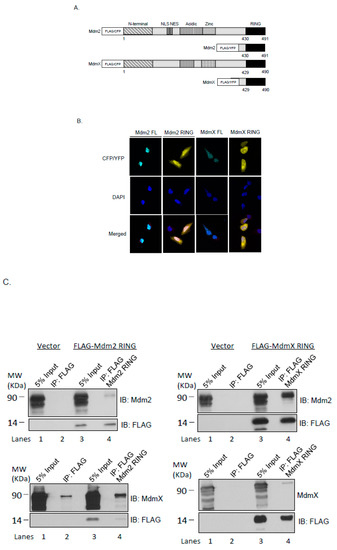