Integration of multiple sources and data levels provides a great insight into the complex associations between human and malaria systems. In this study, a meta-analysis framework was developed based on a heterogeneous network model for integrating human-malaria protein similarities, a human protein interaction network, and a Plasmodium vivax protein interaction network. An iterative network propagation was performed on the heterogeneous network until we obtained stabilized weights. The association scores were calculated for qualifying a novel potential human-malaria protein association. This method provided a better performance compared to random experiments. After that, the stabilized network was clustered into association modules. The potential association candidates were then thoroughly analyzed by statistical enrichment analysis with protein complexes and known drug targets. The most promising target proteins were the succinate dehydrogenase protein complex in the human citrate (TCA) cycle pathway and the nicotinic acetylcholine receptor in the human central nervous system. Promising associations and potential drug targets were also provided for further studies and designs in therapeutic approaches for malaria at a systematic level. In conclusion, this method is efficient to identify new human-malaria protein associations and can be generalized to infer other types of association studies to further advance biomedical science. View Full-Text
Keywords: Plasmodium vivax; iterative network propagation; heterogeneous networks; malaria; host-malaria interactions; network analysis Plasmodium vivax; iterative network propagation; heterogeneous networks; malaria; host-malaria interactions; network analysis
►▼ Show Figures 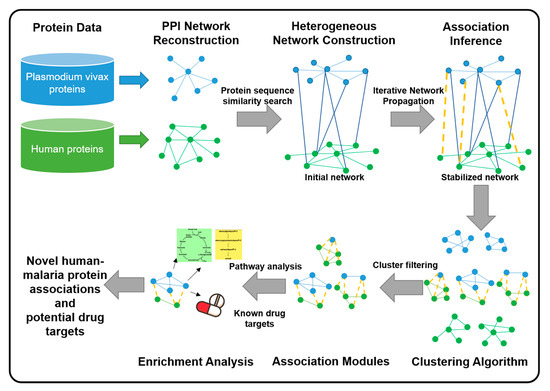