Scrapie infection, which converts cellular prion protein (PrPC) into the pathological and infectious isoform (PrPSc), leads to neuronal cell death, glial cell activation and PrPSc accumulation. Previous studies reported that PrPC regulates RhoA/Rho-associated kinase (ROCK) signaling and that connexin 43 (Cx43) expression is upregulated in in vitro and in vivo prion-infected models. However, whether there is a link between RhoA/ROCK and Cx43 in prion disease pathogenesis is uncertain. Here, we investigated the role of RhoA/ROCK signaling and Cx43 in prion diseases using in vitro and in vivo models. Scrapie infection induced RhoA activation, accompanied by increased phosphorylation of LIM kinase 1/2 (LIMK1/2) at Thr508/Thr505 and cofilin at Ser3 and reduced phosphorylation of RhoA at Ser188 in hippocampal neuronal cells and brains of mice. Scrapie infection-induced RhoA activation also resulted in PrPSc accumulation followed by a reduction in the interaction between RhoA and p190RhoGAP (a GTPase-activating protein). Interestingly, scrapie infection significantly enhanced the interaction between RhoA and Cx43. Moreover, RhoA and Cx43 colocalization was more visible in both the membrane and cytoplasm of scrapie-infected hippocampal neuronal cells than in controls. Finally, RhoA and ROCK inhibition reduced PrPSc accumulation and the RhoA/Cx43 interaction, leading to decreased Cx43 hemichannel activity in scrapie-infected hippocampal neuronal cells. These findings suggest that RhoA/ROCK regulates Cx43 activity, which may have an important role in the pathogenesis of prion disease. View Full-Text
Keywords: prion diseases; RhoA; ROCK; Cx43; p190RhoGAP; neuronal cell death prion diseases; RhoA; ROCK; Cx43; p190RhoGAP; neuronal cell death
►▼ Show Figures 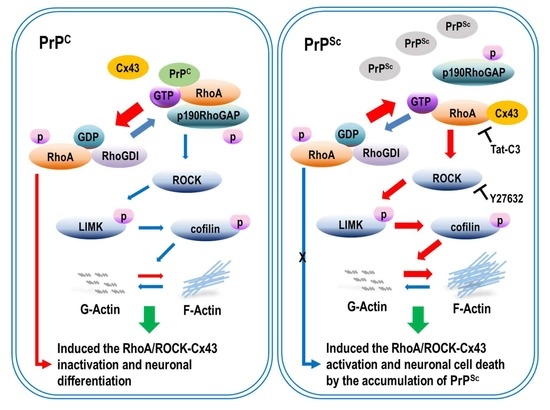