NCAPG is a subunit of condensin I that plays a crucial role in chromatin condensation during mitosis. NCAPG has been demonstrated to be associated with farm animal growth traits. However, its role in regulating myoblast differentiation is still unclear. We used myoblasts derived from fetal bovine tissue as an in vitro model and found that NCAPG was expressed during myogenic differentiation in the cytoplasm and nucleus. Silencing NCAPG prolonged the mitosis and impaired the differentiation due to increased myoblast apoptosis. After 1.5 days of differentiation, silencing NCAPG enhanced muscle-specific gene expression. An assay for transposase-accessible chromatin- high throughput sequencing (ATAC-seq) revealed that silencing NCAPG altered chromatin accessibility to activating protein 1 (AP-1) and its subunits. Knocking down the expression of the AP-1 subunits fos-related antigen 2 (FOSL2) or junB proto-oncogene (JUNB) enhanced part of the muscle-specific gene expression. In conclusion, our data provide valuable evidence about NCAPG’s function in myogenesis, as well as its potential role in gene expression. View Full-Text
Keywords: NCAPG; bovine myoblasts; myogenesis; chromatin accessibility; AP-1 NCAPG; bovine myoblasts; myogenesis; chromatin accessibility; AP-1
►▼ Show Figures 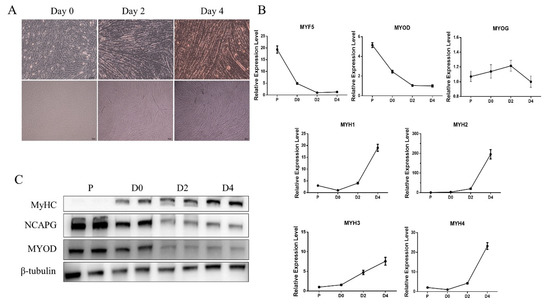