On the Single-Crystal Structure of Tenofovir Alafenamide Mono-Fumarate: A Metastable Phase Featuring a Mixture of Co-Crystal and Salt
Next Article in Special Issue

Why Is the Invasive Plant Sphagneticola trilobata More Resistant to High Temperature Than Its Native Congener?
Previous Article in Journal

As atmospheric [CO2] continues to rise to unprecedented levels, understanding its impact on plants is imperative to improve crop performance and sustainability under future climate conditions. In this context, transcriptional changes promoted by elevated CO2 (eCO2) were studied in genotypes from the two major traded coffee species: the allopolyploid Coffea arabica (Icatu) and its diploid parent, C. canephora (CL153). While Icatu expressed more genes than CL153, a higher number of differentially expressed genes were found in CL153 as a response to eCO2. Although many genes were found to be commonly expressed by the two genotypes under eCO2, unique genes and pathways differed between them, with CL153 showing more enriched GO terms and metabolic pathways than Icatu. Divergent functional categories and significantly enriched pathways were found in these genotypes, which altogether supports contrasting responses to eCO2. A considerable number of genes linked to coffee physiological and biochemical responses were found to be affected by eCO2 with the significant upregulation of photosynthetic, antioxidant, and lipidic genes. This supports the absence of photosynthesis down-regulation and, therefore, the maintenance of increased photosynthetic potential promoted by eCO2 in these coffee genotypes. View Full-Text
Keywords: climate change; coffee tree; elevated air [CO2]; functional analysis; leaf RNAseq climate change; coffee tree; elevated air [CO2]; functional analysis; leaf RNAseq
►▼ Show Figures 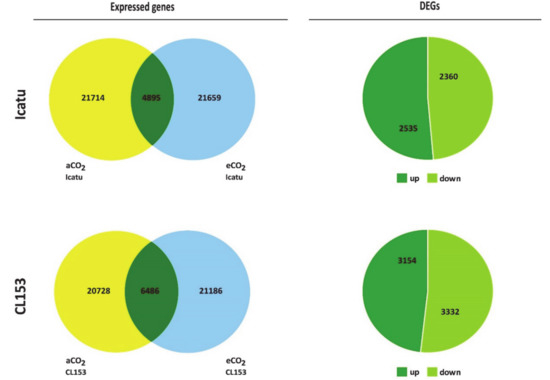