MYC as a Multifaceted Regulator of Tumor Microenvironment Leading to Metastasis

Diabetic nephropathy (DN) is a complication of diabetes mellitus that can lead to proteinuria and a progressive decline in renal function. Endoglin, a co-receptor of TGF-β, is known primarily for regulating endothelial cell function; however, endoglin is also associated with hepatic, cardiac, and intestinal fibrosis. This study investigates whether endoglin contributes to the development of interstitial fibrosis in DN. Kidney autopsy material from 80 diabetic patients was stained for endoglin and Sirius Red and scored semi-quantitatively. Interstitial endoglin expression was increased in samples with DN and was correlated with Sirius Red staining (p < 0.001). Endoglin expression was also correlated with reduced eGFR (p = 0.001), increased creatinine (p < 0.01), increased systolic blood pressure (p < 0.05), hypertension (p < 0.05), and higher IFTA scores (p < 0.001). Biopsy samples from DN patients were also co-immunostained for endoglin together with CD31, CD68, vimentin, or α-SMA Endoglin co-localized with both the endothelial marker CD31 and the myofibroblast marker α-SMA. Finally, we used shRNA to knockdown endoglin expression in a human kidney fibroblast cell line. We found that TGF-β1 stimulation upregulated SERPINE1, CTGF, and ACTA2 mRNA and α-SMA protein, and that these effects were significantly reduced in fibroblasts after endoglin knockdown. Taken together, these data suggest that endoglin plays a role in the pathogenesis of interstitial fibrosis in DN. View Full-Text
Keywords: diabetic nephropathy; endoglin; fibroblast; interstitial fibrosis; TGF-β diabetic nephropathy; endoglin; fibroblast; interstitial fibrosis; TGF-β
►▼ Show Figures 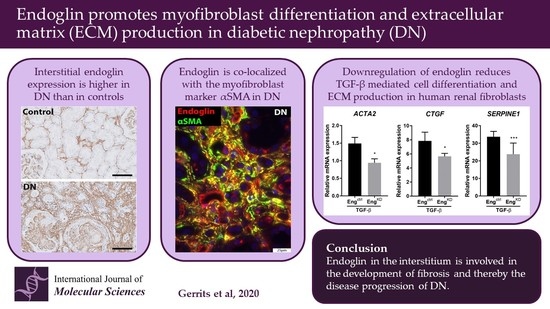