An Atomic Force Microscopy Study on the Effect of β-Galactosidase, α-l-Rhamnosidase and α-l-Arabinofuranosidase on the Structure of Pectin Extracted from Apple Fruit Using Sodium Carbonate
Previous Article in Journal

Sperm Differentiation: The Role of Trafficking of Proteins

Bicarbonate uptake is one of the early steps of capacitation, but the identification of proteins regulating anion fluxes remains elusive. The aim of this study is to investigate the role of sperm solute carrier 4 (SLC4) A1 (spAE1) in the capacitation process. The expression, location, and tyrosine-phosphorylation (Tyr-P) level of spAE1 were assessed. Thereby, it was found that 4,4′-Diisothiocyano-2,2′-stilbenedisulfonic acid (DIDS), an SLC4 family channel blocker, inhibited capacitation in a dose-dependent manner by decreasing acrosome reaction (ARC% 24.5 ± 3.3 vs. 64.9 ± 4.3, p < 0.05) and increasing the percentage of not viable cells (NVC%), comparable to the inhibition by I-172, a cystic fibrosis transmembrane conductance regulator (CFTR) blocker (AR% 30.5 ± 4.4 and NVC% 18.6 ± 2.2). When used in combination, a synergistic inhibitory effect was observed with a remarkable increase of the percentage of NVC (45.3 ± 4.1, p < 0.001). spAE1 was identified in sperm membrane as a substrate for Tyr-protein kinases Lyn and Syk, which were identified as both soluble and membrane-bound pools. spAE1-Tyr-P level increased in the apical region of sperm under capacitating conditions and was negatively affected by I-172 or DIDS, and, to a far greater extent, by a combination of both. In conclusion, we demonstrated that spAE1 is expressed in sperm membranes and it is phosphorylated by Syk, but above all by Lyn on Tyr359, which are involved in sperm viability and capacitation. View Full-Text
Keywords: sperm; SLC4A1; AE1; Tyr-phosphorylation; capacitation; acrosome reaction; Lyn; Syk sperm; SLC4A1; AE1; Tyr-phosphorylation; capacitation; acrosome reaction; Lyn; Syk
►▼ Show Figures 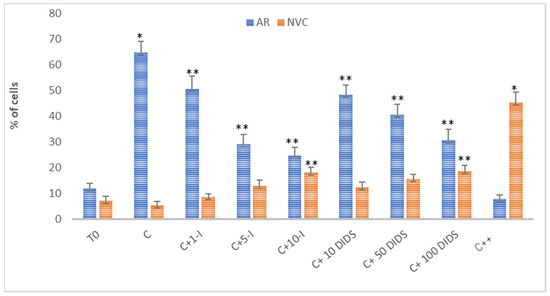