The Combined Use of Phenothiazines and Statins Strongly Affects Doxorubicin-Resistance, Apoptosis, and Cox-2 Activity in Colon Cancer Cells
Previous Article in Journal

A recombinant subunit vaccine (Shingrix®) was recently licensed for use against herpes zoster. This vaccine is based on glycoprotein E (gE) of varicella zoster virus (VZV), the most abundantly expressed protein of VZV, harboring sites for N- and O-linked glycosylation. The subunit vaccine elicits stronger virus-specific CD4+ T cell response as well as antibody B cell response to gE, compared to the currently used live attenuated vaccine (Zostavax®). This situation is at variance with the current notion since a live vaccine, causing an active virus infection, should be far more efficient than a subunit vaccine based on only one single viral glycoprotein. We previously found gE to be heavily glycosylated, not least by numerous clustered O-linked glycans, when it was produced in human fibroblasts. However, in contrast to Zostavax®, which is produced in fibroblasts, the recombinant gE of Shingrix® is expressed in Chinese hamster ovary (CHO) cells. Hence, the glycan occupancy and glycan structures of gE may differ considerably between the two vaccine types. Here, we aimed at (i) defining the glycan structures and positions of recombinant gE and (ii) identifying possible features of the recombinant gE O-glycosylation pattern contributing to the vaccine efficacy of Shingrix®. Firstly, recombinant gE produced in CHO cells (“Shingrix situation”) is more scarcely decorated by O-linked glycans than gE from human fibroblasts (“Zostavax situation”), with respect to glycan site occupancy. Secondly, screening of immunodominant B cell epitopes of gE, using a synthetic peptide library against serum samples from VZV-seropositive individuals, revealed that the O-linked glycan signature promoted binding of IgG antibodies via a decreased number of interfering O-linked glycans, but also via specific O-linked glycans enhancing antibody binding. These findings may, in part, explain the higher protective efficacy of Shingrix®, and can also be of relevance for development of subunit vaccines to other enveloped viruses. View Full-Text
Keywords: antibody binding; B cell epitope; glycoprotein E; glycosylation; vaccine; varicella zoster virus antibody binding; B cell epitope; glycoprotein E; glycosylation; vaccine; varicella zoster virus
►▼ Show Figures 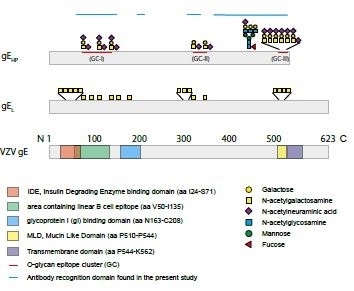