Ovarian Expression of Adipokines in Polycystic Ovary Syndrome: A Role for Chemerin, Omentin, and Apelin in Follicular Growth Arrest and Ovulatory Dysfunction?

Adipokines are a potential link between reproduction and energy metabolism and could partly explain some infertilities related to some pathophysiology, such as polycystic ovary syndrome (PCOS). However, adipokines were predominantly assessed in blood samples, while very little is known concerning their variations in follicular fluid (FF) and ovarian granulosa cells (GCs) of PCOS women. Thus, the objectives of our study were to investigate adiponectin, chemerin, resistin, visfatin, omentin, and apelin ovarian expression in PCOS women in comparison with controls and women with only a polycystic ovary morphology. In total, 78 women undergoing an in vitro fertilization procedure were divided into three groups: 23 PCOS women, 28 women presenting only ≥12 follicles per ovary (ECHO group), and 27 control women. Each group almost equally included normal weight and obese women. Follicular fluid (FF) concentration and granulosa cells (GCs) mRNA expression of adipokines and their receptors were assessed by ELISA and RT-qPCR, respectively. Omentin levels in FF and GC were higher in PCOS than in ECHO and control women, while apelin expression was increased in both PCOS and ECHO groups. FF chemerin concentration was predominant in normal-weight PCOS women compared to BMI (Body Mass Index)-matched ECHO and control women, while GC mRNA levels were higher in the obese PCOS group than in the ECHO one. Compared to PCOS, ECHO women had increased FF adiponectin concentrations and lower plasma AMH levels. The FF concentration of all adipokines was higher in obese subjects except for adiponectin, predominant in normal-weight women. In conclusion, women with PCOS expressed higher GC chemerin and omentin, whereas the ECHO group presented higher levels of FF adiponectin and apelin and lower plasma AMH and LH concentrations. Chemerin, omentin, and apelin expression was differently regulated in women with PCOS, suggesting their possible role in follicular growth arrest and ovulatory dysfunction characterizing PCOS pathogenesis. View Full-Text
Keywords: adipokines; PCOS; polycystic ovary morphology; follicular fluid; human granulosa cells adipokines; PCOS; polycystic ovary morphology; follicular fluid; human granulosa cells
►▼ Show Figures 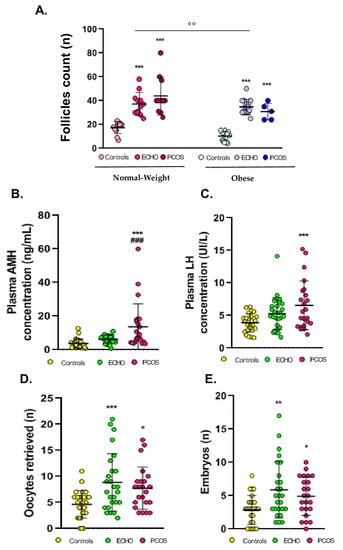