Lipid and Lipid Raft Alteration in Aging and Neurodegenerative Diseases: A Window for the Development of New Biomarkers
Previous Article in Journal

Alteration of Sphingolipids in Biofluids: Implications for Neurodegenerative Diseases

Alzheimer’s disease (AD) and Parkinson’s disease (PD) are the most common neurodegenerative disorders related to aging. Though several risk factors are shared between these two diseases, the exact relationship between them is still unknown. In this paper, we analyzed how these two diseases relate to each other from the genomic, epigenomic, and transcriptomic viewpoints. Using an extensive literature mining, we first accumulated the list of genes from major genome-wide association (GWAS) studies. Based on these GWAS studies, we observed that only one gene (HLA-DRB5) was shared between AD and PD. A subsequent literature search identified a few other genes involved in these two diseases, among which SIRT1 seemed to be the most prominent one. While we listed all the miRNAs that have been previously reported for AD and PD separately, we found only 15 different miRNAs that were reported in both diseases. In order to get better insights, we predicted the gene co-expression network for both AD and PD using network analysis algorithms applied to two GEO datasets. The network analysis revealed six clusters of genes related to AD and four clusters of genes related to PD; however, there was very low functional similarity between these clusters, pointing to insignificant similarity between AD and PD even at the level of affected biological processes. Finally, we postulated the putative epigenetic regulator modules that are common to AD and PD. View Full-Text
Keywords: Alzheimer’s disease; Parkinson’s disease; genetics; gene regulatory network; miRNAs Alzheimer’s disease; Parkinson’s disease; genetics; gene regulatory network; miRNAs
►▼ Show Figures 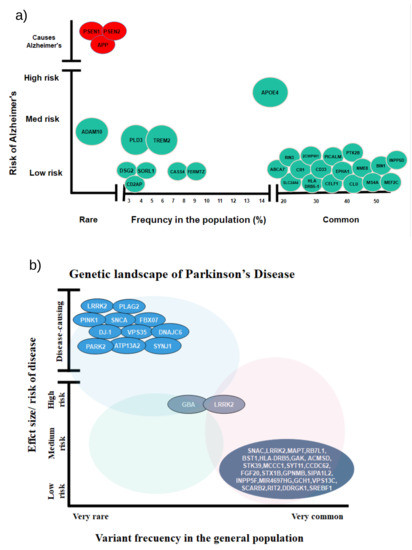