Colletotrichum higginsianum as a Model for Understanding Host–Pathogen Interactions: A Review

Continuous cropping in soybean is increasingly practiced in Heilongjiang Province, leading to substantial yield reductions and quality degradation. Arbuscular mycorrhizal fungi (AMF) are soil microorganisms that form mutualistic interactions with plant roots and can restore the plant rhizosphere microenvironment. In this study, two soybean lines (HN48 and HN66) were chosen as experimental materials, which were planted in different years of continuous cropping soybean soils and were inoculated or not with Funneliformis mosseae in potted-experiments. Ultimately, analysis of root tissue metabolome and root exudates, soil physicochemical properties, plant biomass, as well as rhizosphere soil properties in different experimental treatments, inoculated or not with F. mosseae, was performed. Experimental results showed that: (a) The disease index of soybean root rot was significantly lower in the treatment group than in the control group, and there were differences in disease index and the resistance effect of F. mosseae between the two cultivars; (b) compared with the control, the root tissue metabolome and root exudates remained unchanged, but there were changes in the relative amounts in the treatment group, and the abundant metabolites differed by soybean cultivar; (c) soybean biomass was significantly higher in the treatment group than in the control group, and the effect of F. mosseae on biomass differed with respect to the soybean cultivar; and (d) there were differences in the physiochemical indexes of soybean rhizosphere soil between the treatment and control groups, and the repairing effect of F. mosseae differed between the two cultivars. Therefore, F. mosseae can increase the biomass of continuously cropped soybean, improve the physicochemical properties of the rhizosphere soil, regulate the root metabolite profiles, and alleviate barriers to continuous cropping in potted-experiments of soybean. View Full-Text
Keywords: potted-soybean; Funneliformis mosseae; root metabolites; biomass; soil properties potted-soybean; Funneliformis mosseae; root metabolites; biomass; soil properties
►▼ Show Figures 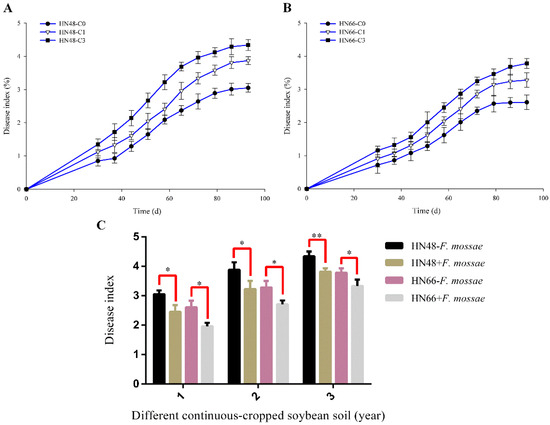