In marine fish, high epithelial intestinal HCO3− secretion generates luminal carbonate precipitates of divalent cations that play a key role in water and ion homeostasis. The present study was designed to expose the putative role for calcium and the calcium-sensing receptor (CaSR) in the regulation of HCO3− secretion in the intestine of the sea bream (Sparus aurata L.). Effects on the expression of the CaSR in the intestine were evaluated by qPCR and an increase was observed in the anterior intestine in fed fish compared with unfed fish and with different regions of intestine. CaSR expression reflected intestinal fluid calcium concentration. In addition, anterior intestine tissue was mounted in Ussing chambers to test the putative regulation of HCO3− secretion in vitro using the anterior intestine. HCO3− secretion was sensitive to varying calcium levels in luminal saline and to calcimimetic compounds known to activate/block the CaSR i.e., R 568 and NPS-2143. Subsequent experiments were performed in intestinal sacs to measure water absorption and the sensitivity of water absorption to varying luminal levels of calcium and calcimimetics were exposed as well. It appears, that CaSR mediates HCO3− secretion and water absorption in marine fish as shown by responsiveness to calcium levels and calcimimetic compounds. View Full-Text
Keywords: sea bream; anterior intestine; bicarbonate secretion and calcium sensing receptor sea bream; anterior intestine; bicarbonate secretion and calcium sensing receptor
►▼ Show Figures 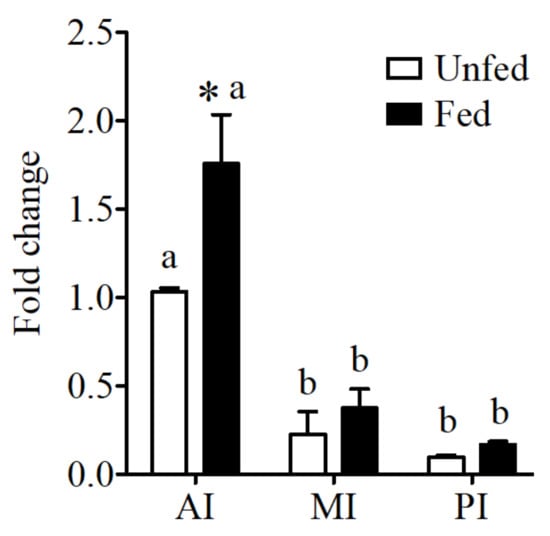