Few quantitative trait loci have been mapped for resistance to Pseudomonas syringae pv. phaseolicola in common bean. Two F2 populations were developed from the host differential UI3 cultivar. The objective of this study was to further characterize the resistance to races 1, 5, 7 and 9 of Psp included in UI3. Using a QTL mapping approach, 16 and 11 main-effect QTLs for pod and primary leaf resistance were located on LG10, explaining up to 90% and 26% of the phenotypic variation, respectively. The homologous genomic region corresponding to primary leaf resistance QTLs detected tested positive for the presence of resistance-associated gene cluster encoding nucleotide-binding and leucine-rich repeat (NL), Natural Resistance Associated Macrophage (NRAMP) and Pentatricopeptide Repeat family (PPR) proteins. It is worth noting that the main effect QTLs for resistance in pod were located inside a 3.5 Mb genomic region that included the Phvul.010G021200 gene, which encodes a protein that has the highest sequence similarity to the RIN4 gene of Arabidopsis, and can be considered an important candidate gene for the organ-specific QTLs identified here. These results support that resistance to Psp from UI3 might result from the immune response activated by combinations of R proteins, and suggest the guard model as an important mechanism in pod resistance to halo blight. The candidate genes identified here warrant functional studies that will help in characterizing the actual defense gene(s) in UI3 genotype. View Full-Text
Keywords: halo blight; Phaseolus vulgaris L.; QTL; resistance; NL genes halo blight; Phaseolus vulgaris L.; QTL; resistance; NL genes
►▼ Show Figures 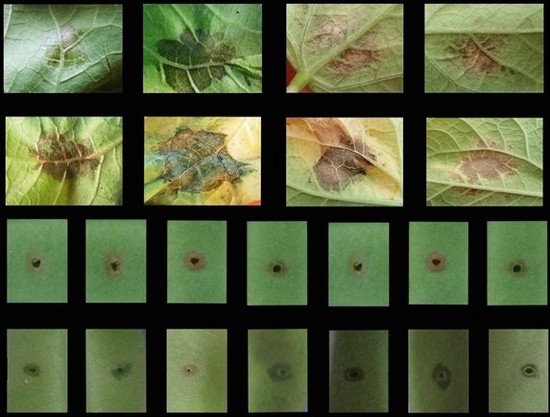