In Search of New Therapeutic Targets in Obesity Treatment: Sirtuins
Next Article in Special Issue

The Prognostic Role of STEAP1 Expression Determined via Immunohistochemistry Staining in Predicting Prognosis of Primary Colorectal Cancer: A Survival Analysis

STEAP1 (six transmembrane epithelial antigen of the prostate 1) is a transmembrane protein that functions as a potential channel or transporter protein. It is overexpressed in certain cancers and is viewed as a promising therapeutic target. However, the prognostic role of STEAP1 is still controversial, and no role for STEAP1 has yet been indicated in colorectal cancer. The aim of this study was to investigate the possible association of STEAP1 expression with colorectal cancer prognosis. STEAP1 expression was analyzed by immunohistochemical staining of a tissue array of 165 cancer specimens from primary colorectal cancer patients. The mean and medium follow-up times after surgery were 5.1 and 3.9 years, respectively. A total of 139 patients died during the 13 years of follow-up in the survey period. The prognostic value of STEAP1 with respect to overall survival was analyzed by Kaplan-Meier analysis and Cox proportional hazard models. In total, 164 samples displayed detectable STEAP1 expression in the cytoplasm and membrane. Low STEAP1 expression was correlated with poor overall survival (five-year survival: 33.7% vs. 57.0%, low expression vs. high expression, p = 0.020). Accordingly, multivariate analysis identified low STEAP1 expression as an independent risk factor (hazard ratio = 1.500, p = 0.018), especially in elderly patients or those with late stage cancers, late T values, and early N values. We suggest that analysis of STEAP1 expression by immunohistochemical staining could serve as an independent prognostic marker for colorectal patients. This finding should be validated by other investigative groups. View Full-Text
Keywords: STEAP1; prognosis; colorectal cancer STEAP1; prognosis; colorectal cancer
►▼ Show Figures 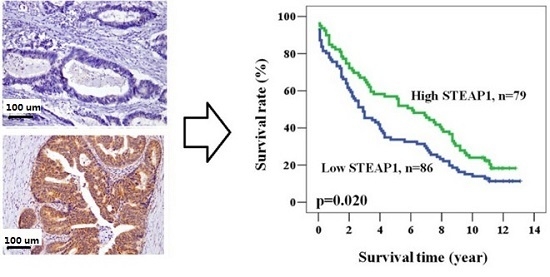