Successful fertilization and subsequent embryo development rely on complex molecular processes starting with the development of oocyte competence through maturation. MicroRNAs (miRNAs) are small non-coding RNA molecules that function as gene regulators in many biological systems, including the oocyte and embryo. In order to further explore the roles of miRNAs in oocyte maturation, we employed small RNA sequencing as a screening tool to identify and characterize miRNA populations present in pools of bovine germinal vesicle (GV) oocytes, metaphase II (MII) oocytes, and presumptive zygotes (PZ). Each stage contained a defined miRNA population, some of which showed stable expression while others showed progressive changes between stages that were subsequently confirmed by quantitative reverse transcription polymerase chain reaction (RT-PCR). Bta-miR-155, bta-miR-222, bta-miR-21, bta-let-7d, bta-let-7i, and bta-miR-190a were among the statistically significant differentially expressed miRNAs (p < 0.05). To determine whether changes in specific primary miRNA (pri-miRNA) transcripts were responsible for the observed miRNA changes, we evaluated pri-miR-155, -222 and let-7d expression. Pri-miR-155 and -222 were not detected in GV oocytes but pri-miR-155 was present in MII oocytes, indicating transcription during maturation. In contrast, levels of pri-let-7d decreased during maturation, suggesting that the observed increase in let-7d expression was likely due to processing of the primary transcript. This study demonstrates that both dynamic and stable populations of miRNAs are present in bovine oocytes and zygotes and extend previous studies supporting the importance of the small RNA landscape in the maturing bovine oocyte and early embryo. View Full-Text
Keywords: miRNA; in vitro maturation (IVM); in vitro fertilization (IVF); next-generation sequencing; miR-155 miRNA; in vitro maturation (IVM); in vitro fertilization (IVF); next-generation sequencing; miR-155
►▼ Show Figures 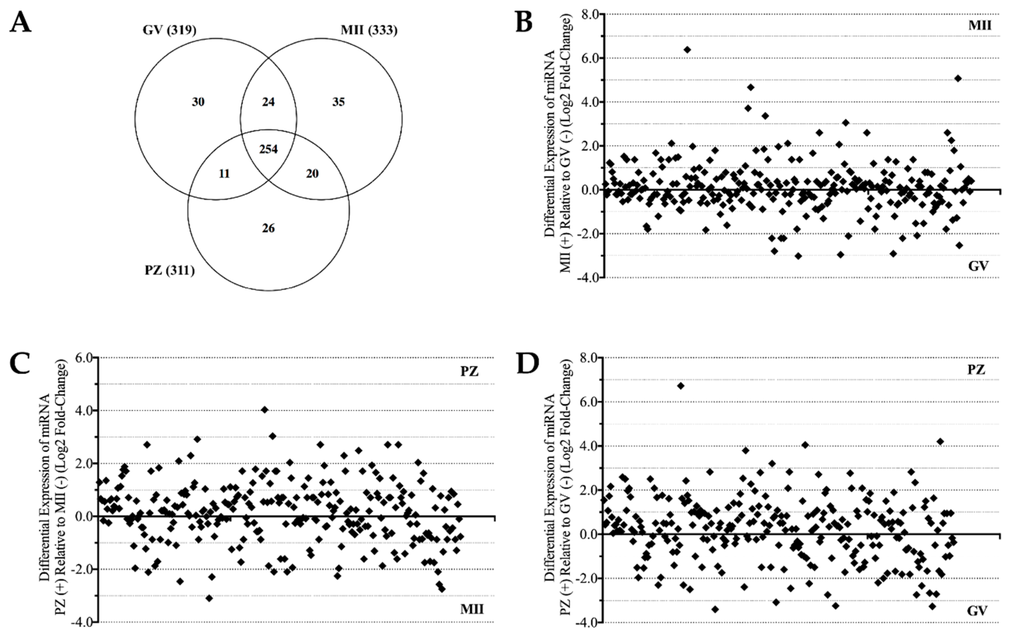