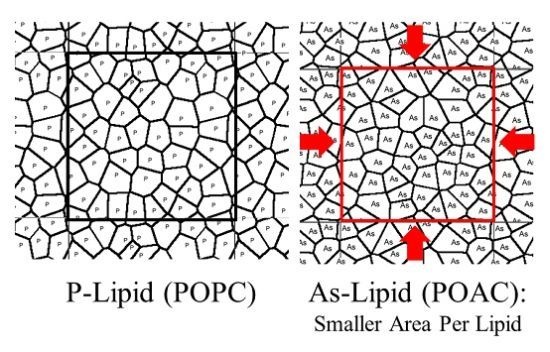 Phosphorus is one of the six most important chemical elements, in addition to carbon, oxygen, nitrogen, hydrogen, and sulfur, which are essential for all forms of life. Phosphorus is a component of adenosine triphosphate (ATP), a principal energy carrier in the cells of organism. The sugar-phosphate chain forms the structural backbone of DNA and RNA. The phosphate group of phospholipids are a major component of cell membranes. In 2011, Wolfe-Simon and co-workers claimed to have discovered a bacterium strain, GFAJ-1 of the Halomonadaceae, isolated from the arsenic-rich waters of Mono Lake, California, that can use arsenic in place of phosphorus to sustain its growth [1]. While arsenic has some chemical similarities with phosphorus, it is usually toxic to most living things. The GFAJ-1 bacteria however had incorporated arsenic into their DNA and proteins and radiolabeled 73AsO43− experiments showed a small fraction of 73AsO43− was also present in the lipids. This study, however, received many controversial comments. One of the comments is that the arsenate compounds would undergo very rapid hydrolytic cleavage in water [2]. In contrast, the phosphodiester linkages of native DNA is stable with a hydrolysis half-life of approximately 30,000,000 years at 25 °C. Nevertheless, a theoretical functional density study, performed by Gu, Leszczynski, and co-workers [3], revealed that the base-stacking and base-base pairing structure of DNA could increase the stability of arsenate in respect to hydrolysis, in comparison with isolated arsenate model compounds. However, this computational study also suggested that arsenated-DNA is still less stable than normal DNA under hydrolysis.
On the other hand, recent studies revealed that although the bacterial strain GFAJ-1 discovered in California’s Mono Lake is arsenic-tolerant, it requires phosphorus [4]. Further, mass spectrometry did not detect covalently bound arsenated-DNA. Another study, by Erb, Kiefer and co-workers, showed that GFAJ-1 can grow at low phosphate concentrations, even with the co-existence of the high concentrations of arsenate [5]. In contrast, GFAJ-1 cannot grow in a phosphorus-depleted (<0.3 μM) and arsenate-containing environment. The study of Elia,Wellner and co-workers showed that the “arsenic-life” bacteria strongly prefer phosphorus over arsenic [6]. They tested five types of periplasmic phosphate-binding proteins (PBPs) that can uptake phosphate in bacterial cells. Their results showed that all tested PBPs prefer phosphate to arsenate at least 500-fold; in particular, one of the PBPs of GFAJ-1 shows roughly 4500-fold preference for phosphate over arsenate. This work provides a comprehensive understanding of how GFAJ-1 can grow at a high concentration of arsenate.
Although the issue of existence of arsenic-based life is controversial, it remains an open and interesting research topic [7,8] due to the similar chemical properties of phosphorus and arsenic [9]. Arsenate and phosphate have striking chemical similarities. For examples, the arsenate, AsO43-, has the same tetrahedral structure, bonding sites, and nearly identical pKa as phosphate, PO43-. Biological membranes, usually present in the form of phospholipid bilayers, play significant roles in controlling the compartment, transportation, and communication functions of cells [10]. The extensive chemical similarity between arsenate and phosphate raises the question: what are the structural and dynamical differences between putative arsenic substituted lipid bilayers and native phospholipid bilayers? The structural and dynamical properties of lipid bilayers will influence its biological implications. In this study, we studied putative 1-palmitoyl-2-oleoyl-sn-glycero-3-arsenocholine (POAC) lipid bilayers in which the phosphorus in 1-palmitoyl-2-oleoyl-sn-glycero-3-phosphocholine lipid (POPC) is substituted by arsenic by all-atom molecular dynamics (MD) simulations. The chemical structure of POAC and POPC lipids are displayed in Figure 1. We first developed a force field for the arsenate group in POAC, which is compatible with the CHARMM36 lipid force field. Various structural and dynamical properties of POAC lipid bilayers were calculated; we compared the structural and dynamical properties of POAC lipid bilayers with those of POPC lipid bilayers to understand how the arsenate groups affect the structural and dynamical properties of lipid bilayers.

2.1. Area per Lipid and Membrane Thickness

Parameterization of the arsenate group of POAC lipids used the model compounds dimethyl arsenate (DMA, see Figure 7). Parameters of DMA were first developed and then transferred to the dimethyl arsenate group in POAC. To be compatible with the corresponding force fields of POPC, we mainly followed the original methodologies of Karplus et al.[20] in developing the parameters of dimethyl phosphate (DMP). All ab initio calculations were performed by Gaussian 09 program [21]. The structure of DMA was optimized in the gauche-gauche (two O2A-As-OSA-CT3 dihedral angles) conformation at the HF/6-31G* level. The optimized structures of DMA were used to develop a set of 36 internal coordinates and to construct the B matrix, allowing conversion from Cartesian to internal coordinates. The vibrational spectra of DMA was calculated at the HF/6-31G* level based on its optimized structure. A scaling factor 0.9 was applied to scale the vibrational frequencies of DMA. The U matrix, which permits analysis of the harmonic vibrational frequencies in terms of the potential energy distribution among symmetry-adapted coordinates, was calculated by MOLVIB module implemented in CHARMM program [22].
Molecular mechanics were performed using the CHARMM program for which the potential functions were pre-defined. The energy function includes internal and external non-bonded terms; the internal terms include bond stretching, angle bending, and dihedral angle torsion; the external non-bonded interactions are represented by a Lennard-Jones 6–12 term for the van der waals repulsion and dispersion interaction and a Coulomb term for the charge-charge interactions. Their potential functions are expressed as:
where Kb, Kθ, and Kφ are the force constants of bond stretching, angle bending, and dihedral angle torsion, respectively; b, θ, and φ are the bond length, bond angle, and dihedral angle, respectively; bo and θo are the reference bond length and bond angle, respectively. ɛ is the Lennard-Jones well-depth and σ is the distance at Lennard-Jones minimum, qi is the partial atomic charge and e is the dielectric constant which can depend on rij and rij is the distance between atoms i and j.
Non-bonded interaction parameters (point charges, ɛ, and σij) were optimized to maintain a proper balance between solvent-solute interactions of all configurations shown in Figure 7. The solvent-solute interaction energies were calculated from ab initio calculations with the corrections of basis set superposition error [23]. The optimized interaction energy and distance are shown in Table 1, which are good agreement with the HF/6-31G* values for all configurations. The optimized non-bonded parameters are provided in the Table S1 (supporting information).
The empirical potentials of stretching and bending motions were fitted into their corresponding potential energy surfaces of HF/6-31G* calculations. Furthermore, the force constants were re-optimized to the harmonic vibrational frequencies of scaled HF/6-31G* results and normal mode assignments (Table S2) using MOLVIB. The optimized stretching and bending parameters are provided in the Table S1. The next optimization focuses on the torsion parameters. The parameters of three torsion angles, O2A-As-OSA-CT3, OSA-As-OSA-CT3, and As-OSA-CT3-HA, were optimized to fit the adiabatic torsional potential energy surface of HF/6-31G* results. Their torsional potential energy surfaces of empirical calculations and HF/6-31G* calculations were shown in Figure S1 (SI) and they are good agreement with each other. The optimized empirical data of these torsion angles are listed in Table S1 (SI).

We simulated the POAC and POPC lipid bilayers by molecular dynamics. The initial configurations of the POAC and POPC systems were prepared using the CHARMM-GUI developed by Im and co-workers [24]. The empirical parameters of the DMA developed above were used to model the arsenate group of POAC lipids, while other groups as well as counter ions were modeled using the CHARMM36 all-atom force field [25]. Water molecules were modeled using the TIP3 model [26]. Each lipid bilayer system consisted of 96 lipids (48 lipids for each leaflet), 4863 water molecules, 13 Na+ and 13 Cl− (0.15 M NaCl); the corresponding water–lipid ratio was 50.63. All MD simulations were performed using parallel NAMD 2.7b3 software [27] with an NPT ensemble under three-dimensional periodic boundary conditions. The simulation temperature was controlled to 300 K through Langevin dynamics. The pressure was controlled at 1 bar using the Langevin piston Nosé–Hoover method [28] and the three orthogonal dimensions of the periodic box were allowed to vary independently. The van der Waals interactions were switched smoothly from 9.0 to 12.0 Å to maintain energy stability. Cutoffs of 12.0 and 13.5 Å were used to calculate the pair-wise interactions and generate the list of pairs, respectively. The non-bonded neighboring list was updated every 10 time steps. The particle-mesh Ewald technique [29] was used to treat the long-range electrostatic interactions. The hydrogen atom involved covalent bond lengths were constrained by the SHAKE algorithm [30], allowing the use of a larger integration time step of 2 fs. Prior to MD production runs, conjugate gradient energy minimization was performed to remove the bad contacts of the initial configuration. Next, a 0.1-ns slow heating simulation was performed. The molecular coordinates were stored every 5 ps. For all systems, a 150-ns MD simulation was performed. The trajectories of the final 75 ns simulation were used for statistical analysis. All analyses were performed by our in-house program, Pine-MD, which had been employed in previous MD studies of lipid bilayers [31], amyloidogenic peptides [32,33], and antimicrobial peptides [34]. Several structural and dynamics properties of lipid bilayers were calculated. The analysis methods are described in the Results and Discussion section. 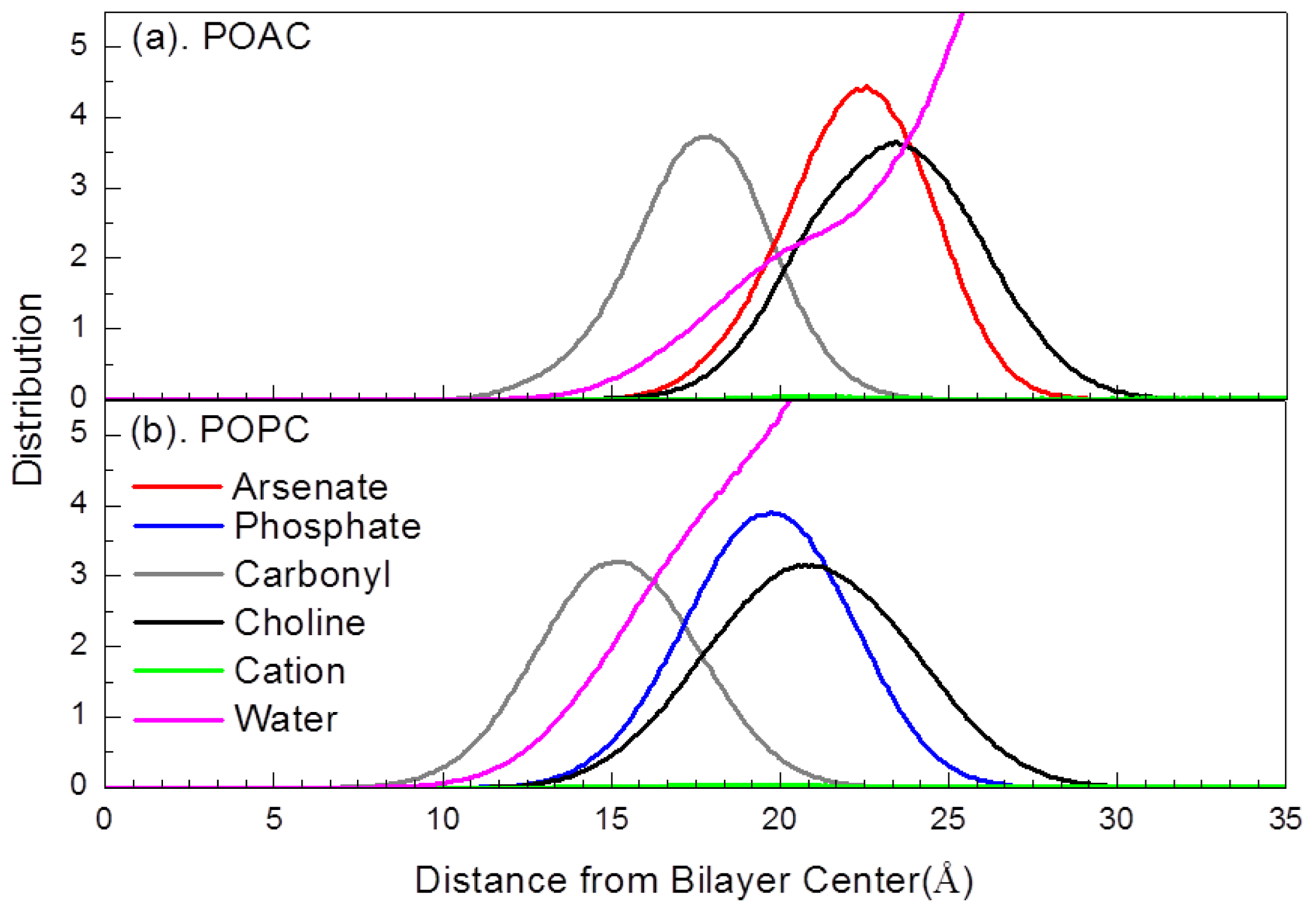 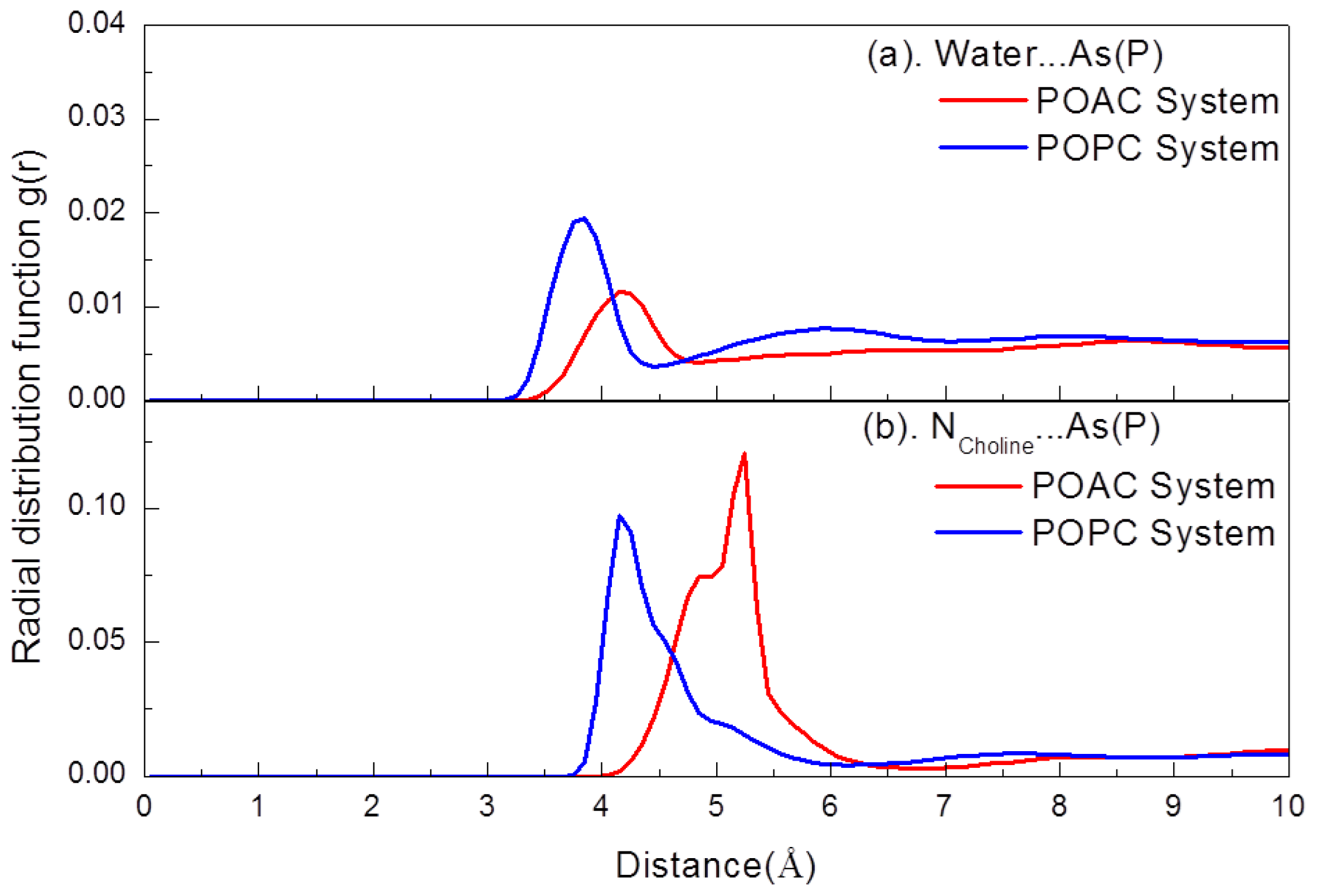 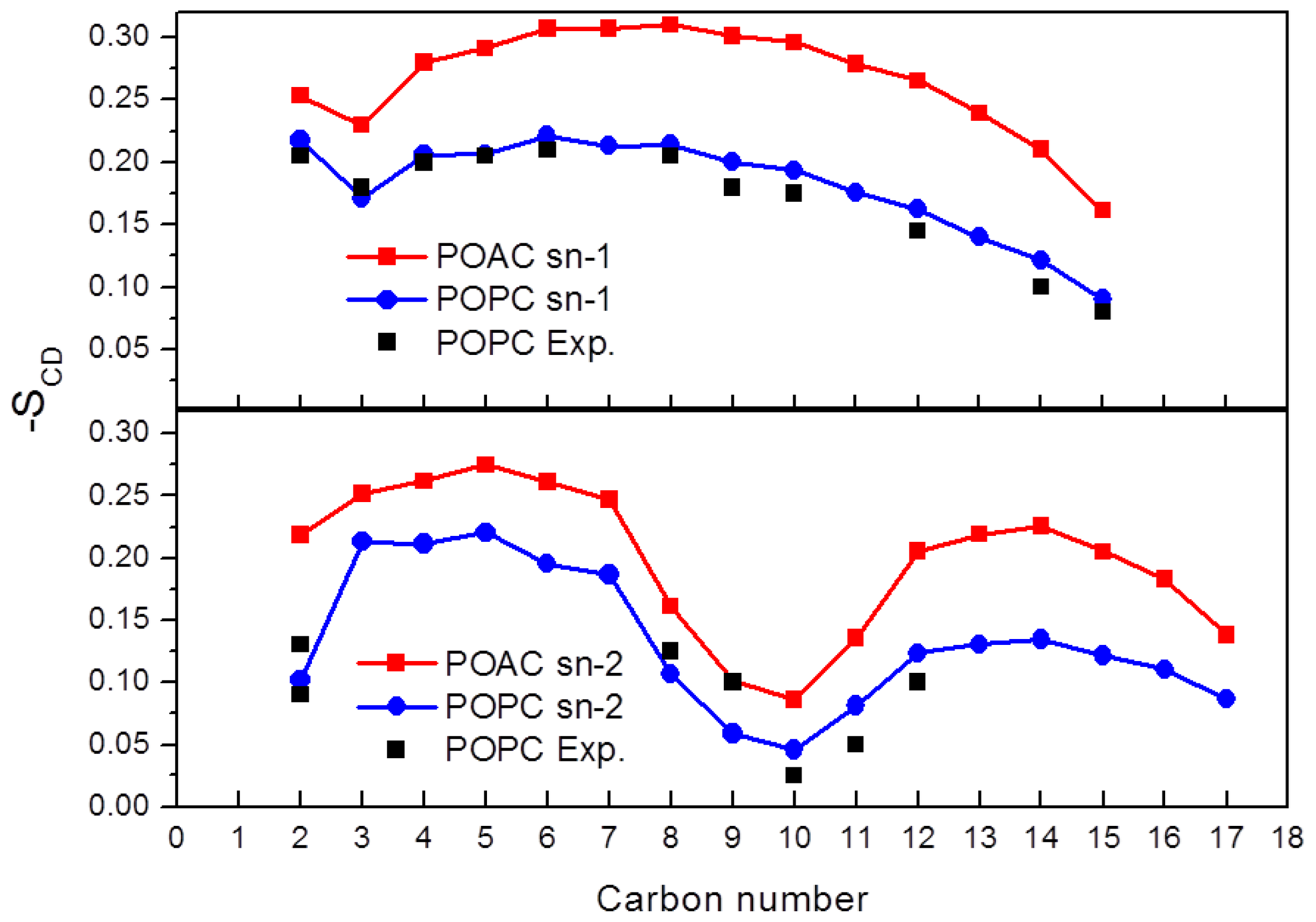 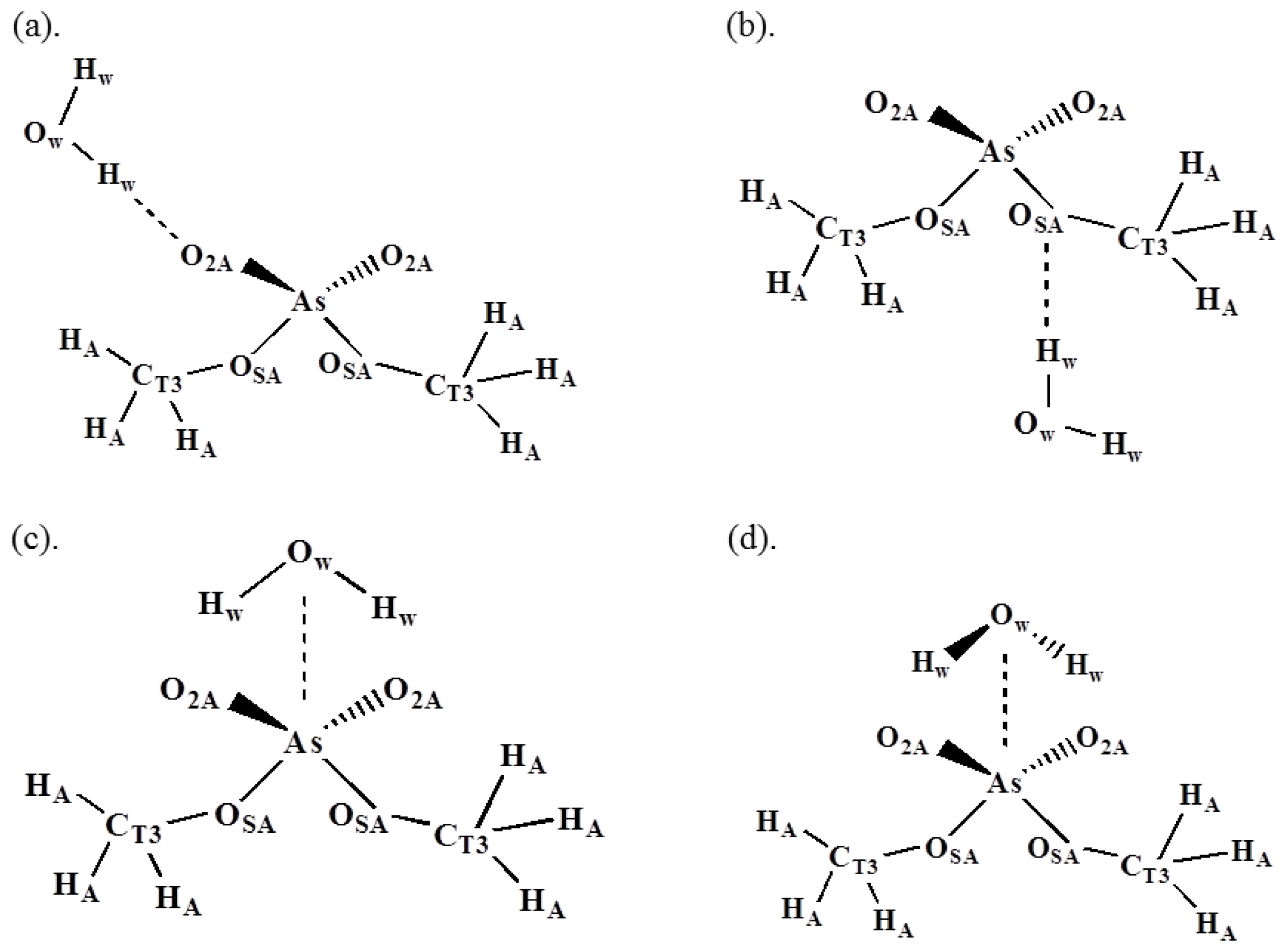