Black cohosh is a well-established medicinal plant and preparations of its rootstock are used for the treatment of mild climacteric complaints. The compounds considered responsible for the therapeutic effect are triterpene glycosides, characterized by a cycloartane scaffold and a pentose moiety. Because some of these triterpenoids were found to exhibit relevant cytotoxic effects against human breast cancer cells, we decided to investigate their activity on multiple myeloma cell lines NCI-H929, OPM-2, and U266. In a systematic approach, we initially tested three known cytotoxic compounds of three different triterpenoid types, revealing the cimigenol-type triterpenoid as the most active constituent. In a second round, seven naturally occurring cimigenol derivatives were compared with respect to their sugar moiety and their substitution pattern at position C-25, leading to 25-O-methylcimigenol-3-O-α-L-arabinopyranoside as the most potent candidate. Interestingly, not only the methyl group at position C-25 increased the cytotoxic effect but also the arabinose moiety at position C-3 had an impact on the activity. The variety of cimigenol derivatives, moreover, allowed a detailed discussion of their structure–activity relationships, not only for their effect on multiple myeloma cells but also with regard to previous studies on the cytotoxicity of black cohosh triterpenoids. View Full-Text
Keywords: Cimicifuga racemosa; actein; sheng ma; shengmanol; cancer; tumor; natural product; cytotoxicity; apoptosis; structureactivity relationship Cimicifuga racemosa; actein; sheng ma; shengmanol; cancer; tumor; natural product; cytotoxicity; apoptosis; structureactivity relationship
►▼ Show Figures 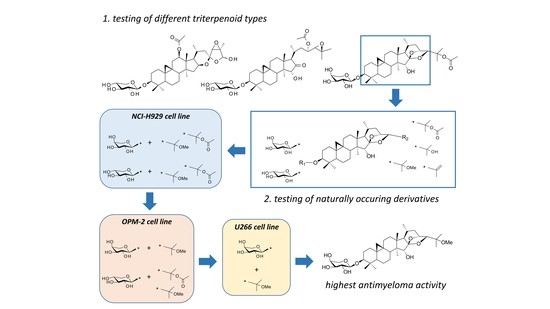