Fentanyl Family at the Mu-Opioid Receptor: Uniform Assessment of Binding and Computational Analysis

Bunias erucago belongs to the Brassicaceae family, which represents a forgotten crop of the Euro-Mediterranean area. The aim of the present study was to determine the glucosinolate profile in different plant parts and biological properties (antioxidant, anticholinesterase, and cytotoxic activities) of the isolates containing glucosinolate breakdown products. The chemical profiles were determined by using HPLC-PDA-MS/MS of desulfoglucosinolates and GC-MS of glucosinolate degradation products. The analysis of B. erucago showed the presence of seven glucosinolates: gluconapin (1), glucoraphasatin (2), glucoraphenin (3), glucoerucin (4), glucoraphanin (5), glucotropaeolin (6), and glucosinalbin (7). The total glucosinolate content ranged from 7.0 to 14.6 µmol/g of dry weight, with the major glucosinolate glucosinalbin in all parts. The antioxidant activity of all volatile isolates was not notable. At a tested concentration of 227 μg/mL, flower hydro-distillate (FH) showed good AChE inhibition, i.e., 40.9%, while root hydro-distillate (RH) had good activity against BChE, i.e., 54.3%. FH showed the best activity against both tested human bladder cancer cell lines, i.e., against T24 after 72 h, which have IC50 of 16.0 μg/mL, and against TCCSUP after 48 h with IC50 of 7.8 μg/mL, and can be considered as highly active. On the other hand, RH showed weak activity against tested cancer cells. View Full-Text
Keywords: Bunias erucago L.; glucosinolates; desulfoglucosinolates; isothiocyanates; nitriles; anti-oxidation; cholinesterase inhibition; cytotoxic activity Bunias erucago L.; glucosinolates; desulfoglucosinolates; isothiocyanates; nitriles; anti-oxidation; cholinesterase inhibition; cytotoxic activity
►▼ Show Figures 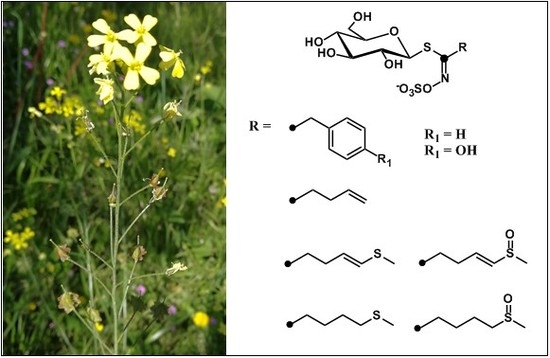