Analysis of the Carry-Over of Ochratoxin A from Feed to Milk, Blood, Urine, and Different Tissues of Dairy Cows Based on the Establishment of a Reliable LC-MS/MS Method
Next Article in Special Issue

Effects of Halogen, Chalcogen, Pnicogen, and Tetrel Bonds on IR and NMR Spectra

Complexes were formed pairing FX, FHY, FH2Z, and FH3T (X = Cl, Br, I; Y = S, Se, Te; Z = P, As, Sb; T = Si, Ge, Sn) with NH3 in order to form an A⋯N noncovalent bond, where A refers to the central atom. Geometries, energetics, atomic charges, and spectroscopic characteristics of these complexes were evaluated via DFT calculations. In all cases, the A–F bond, which is located opposite the base and is responsible for the σ-hole on the A atom, elongates and its stretching frequency undergoes a shift to the red. This shift varies from 42 to 175 cm−1 and is largest for the halogen bonds, followed by chalcogen, tetrel, and then pnicogen. The shift also decreases as the central A atom is enlarged. The NMR chemical shielding of the A atom is increased while that of the F and electron donor N atom are lowered. Unlike the IR frequency shifts, it is the third-row A atoms that undergo the largest change in NMR shielding. The change in shielding of A is highly variable, ranging from negligible for FSnH3 all the way up to 1675 ppm for FBr, while those of the F atom lie in the 55–422 ppm range. Although smaller in magnitude, the changes in the N shielding are still easily detectable, between 7 and 27 ppm. View Full-Text
Keywords: stretching frequency; chemical shielding; atomic charge; NBO stretching frequency; chemical shielding; atomic charge; NBO
►▼ Show Figures 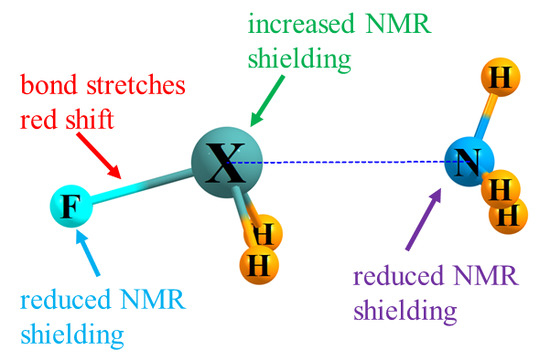