Arnicolide D, from the herb Centipeda minima, Is a Therapeutic Candidate against Nasopharyngeal Carcinoma
Previous Article in Journal

Polysaccharide extracted from okra (Abelmoschus esculentus (L.) Moench), a traditional functional food, is a biologically active substance reported to possess hypoglycemic and anti-oxidative qualities. However, it is unknown which polysaccharides play a role and have the potential mechanism. This present study is to assess the possible impacts of a novel polysaccharide isolated from okra (OP) on mice fed with a high-fat diet (HFD) combined with an intraperitoneal injection (i.p.) of 100 mg/kg streptozotocin (STZ) twice, to induce type 2 diabetes mellitus (T2DM). We found that an eight-week administration of OP at 200 or 400 mg/kg body weight significantly alleviated the symptoms, with elevations in blood glucose, triglyceride (TG), total cholesterol (TC) and low-density lipoprotein cholesterol (LDL-C), as well as reducing high-density lipoprotein cholesterol (HDL-C), body weight, food, and water consumption. The OP treatment increased the hepatic glycogen and decreased the mussy hepatic cords and liver fibrosis in the T2DM mice. The decreases of ROS and MDA and the increases of SOD, GSH-Px and CAT in liver were observed after administration of OP. OP alleviated the T2DM characteristics through the activation of the phosphoinositide 3-kinase (PI3K)/protein kinase B (AKT)/glycogen synthase kinase 3 beta (GSK3β) pathway, and enhanced the nuclear factor erythroid-2 (Nrf2) expression and promoted Nrf2-medicated heme oxygenase-1(HO-1) and superoxide dismutase 2 (SOD2) expression. OP also relieved mitochondrial dysfunction by inhibiting NOX2 activation. Taken together, these findings suggest that a polysaccharide isolated from okra exerts anti-T2DM effects partly by modulating oxidative stress through PI3K/AKT/GSK3β pathway-medicated Nrf2 transport. We have determined that a polysaccharide possesses hypoglycemic activity, as well as its underlying mechanism. View Full-Text
Keywords: a polysaccharide from Abelmoschus esculentus (L.) Moench; type 2 diabetes mellitus; oxidative stress; PI3K/AKT/GSK3β pathway; Nrf2 transport a polysaccharide from Abelmoschus esculentus (L.) Moench; type 2 diabetes mellitus; oxidative stress; PI3K/AKT/GSK3β pathway; Nrf2 transport
►▼ Show Figures 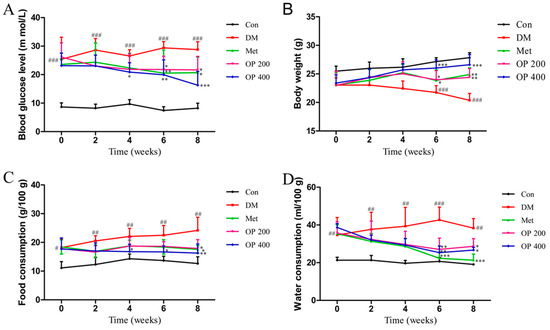