Discovery of 2-(4-Substituted-piperidin/piperazine-1-yl)-N-(5-cyclopropyl-1H-pyrazol-3-yl)-quinazoline-2,4-diamines as PAK4 Inhibitors with Potent A549 Cell Proliferation, Migration, and Invasion Inhibition Activity
Next Article in Special Issue

Sirtuins are nicotinamide adenine dinucleotide (NAD+)-dependent class III histone deacetylases, which have been linked to the pathogenesis of numerous diseases, including HIV, metabolic disorders, neurodegeneration and cancer. Docking of the virtual pan-African natural products library (p-ANAPL), followed by in vitro testing, resulted in the identification of two inhibitors of sirtuin 1, 2 and 3 (sirt1–3). Two bichalcones, known as rhuschalcone IV (8) and an analogue of rhuschalcone I (9), previously isolated from the medicinal plant Rhus pyroides, were shown to be active in the in vitro assay. The rhuschalcone I analogue (9) showed the best activity against sirt1, with an IC50 value of 40.8 µM. Based on the docking experiments, suggestions for improving the biological activities of the newly identified hit compounds have been provided. View Full-Text
Keywords: bichalcones; sirtuin inhibitors; virtual screening bichalcones; sirtuin inhibitors; virtual screening
►▼ Show Figures 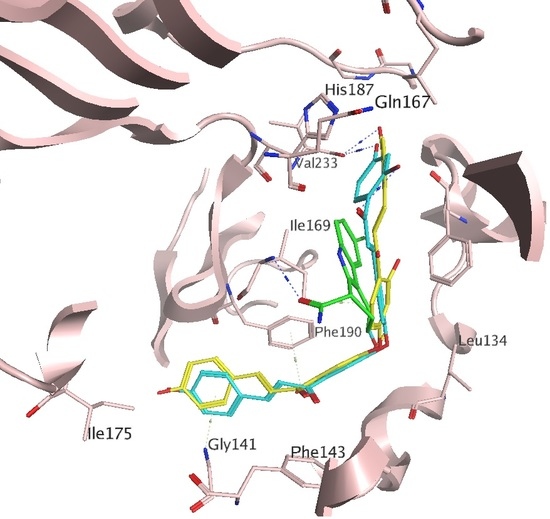